From the University of Wisconsin Digital Collections: 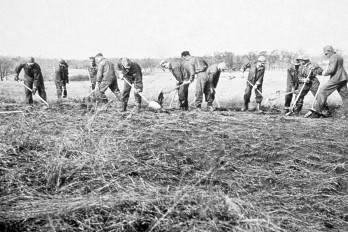 A Civilian Conservation Corps crew in 1935 turns the soil of an old farm field in preparation for a prairie restoration planting.

An “Arboretum for the University” was first proposed by landscape architect John Nolen in his 1911 report Madison: A Model City. The idea was later promoted by Michael Olbrich and the Madison Parks and Pleasure Drive Association, beginning in 1925, as they raised money for Madison parks in an effort to save open space and public access to lake shores. Olbrich hoped for an Arboretum that might also be a wildlife sanctuary, experimental forest preserve, protected area for sacred Native American sites, place to experiment with re-establishing historical Wisconsin landscapes, and refuge from the city. Olbrich convinced the UW Board of Regents to aid in the land purchase for a Forest Preserve Arboretum and Wild Life Refuge at the end of 1927, but the initial 246 acres were not acquired until April 26, 1932.

Two years later the Arboretum had grown to 500 acres. At the formal dedication on June 17, 1934, research director Aldo Leopold outlined the focus of re-establishing “original Wisconsin” landscape and plant communities, particularly those that predated European settlement, such as tallgrass prairie and oak savanna. Though the Arboretum Committee may not have anticipated it in the 1930s, they introduced a new concept in ecology: ecological restoration—the process of returning an ecosystem or piece of land to a previous, usually more natural, condition. In doing so, they created a place that pioneered the restoration and management of ecological communities. Many of the early visions have also continued through Arboretum history.

Most of the Arboretum’s current land holdings came from gifts and purchases during the Great Depression. In addition to inexpensive land, the Depression brought a ready supply of hands to work it. Between 1935 and 1941, crews from the Civilian Conservation Corps were stationed at the Arboretum and provided most of the labor needed to begin restoring ecological communities.

The Arboretum now comprises 1,200 acres in Madison, plus outlying properties throughout Wisconsin. Efforts to restore or create historic ecological communities have continued through the decades, and the Arboretum manages the oldest restored prairie along with an extensive collection of restored ecosystems.

In addition, like most arboreta, the Arboretum has traditional horticultural collections of labeled plants arranged in garden-like displays. These collections feature trees and shrubs of the world and represent the state’s largest woody plant collection. Some of these collections, such as lilacs and the pinetum, have been part of the Arboretum since its earliest years.