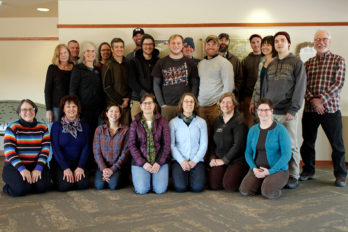 Karen Oberhauser, Director
608-262-2748  |  koberhauser@wisc.edu
Karen joined the Arboretum in 2017 after 32 years studying monarch butterflies and teaching at the University of Minnesota. She loves working at the Arboretum because it blends her passions for environmental education, conservation research, and habitat conservation, and because the staff, volunteers, and friends of the Arboretum are an amazing team. Her favorite Arboretum moments occur during her daily walk (or bike ride) to work through the Leopold Pines and Curtis Prairie, where she is constantly reminded of the legacy that this team is carrying on.

Denise Westphal, Business Office Administrator
608-263-7760 | denise.westphal@wisc.edu
Denise Westphal originally joined the Arboretum in 2013, bringing a varied background of human resource and budgeting experience. She loves working with the staff and being able to take breaks throughout the day to stroll the trails, especially the trail leading to the tunnel beneath the Beltline, which both intrigues and terrifies her.

Susan Day, Communications Coordinator
608-265-3355  |  susan.day@wisc.edu
Susan has been at the Arboretum since 2013. She has been a communications professional for more than 10 years and an editor and publication manager for more than 20. She enjoys collaborating with coworkers and sharing stories and images of the Arboretum’s wide-ranging expertise, work on the land, and ever-changing habitats and scenery. Her favorite places are the Grady Tract oak savannas, Curtis Prairie when the grasses and wildflowers tower overhead, and the pine forests. She is grateful for this rich natural resource in the middle of Madison and all who work to care for it.

Scott Dyke, Arboretum/Journey North Communications Specialist
608-264-1491  |  scott.dyke@wisc.edu
Scott joined the Arboretum in January of 2020, having previously worked for the Driftless Area Land Conservancy in Dodgeville, WI. A native Madisonian, Scott has explored and enjoyed the Arboretum since he was a child, and he still regularly hits the trails to refresh his mind and observe native biodiversity. He considers the Arboretum instrumental in fostering his passion for the natural world and hopes it will do the same for future generations. Some of his favorite locations are the Wingra Oak Savanna and the Skunk Cabbage Wetlands.

Erica Lee, Development Specialist
608-263-7889  |  ealee7@wisc.edu
Erica joined the Arboretum in fall 2018, bringing nearly 20 years of nonprofit development experience. She has worked at a variety of organizations in the United States and Ireland, including the Field Museum in Chicago. She is a self-professed ‘data nerd’ and a lover of lilacs. She enjoys spending her lunch break walking through the Arboretum gardens.

Chad MacWilliams, Custodian
Chad has been the Arboretum custodian since 1999, when the Visitor Center addition was under construction. In addition to maintaining the Visitor Center and outbuildings, he enjoys mowing in the tree collection, making repairs, removing snow, and helping on the prescribed fire crew.

Amy Novak, Custodian
Amy Novak joined the Arboretum staff in the fall of 2016. Serving as weekend support, she is grateful to be a part of this legendary and sacred space. Her favorite moments include sightings of screech owls, crane families, coyotes, and hawks. Her favorite time is driving into the Arboretum at dawn. The peace and tranquility here are unmatched.

Katie Pfankuch, Visitor Center Coordinator
608-265-5215  |  kpfankuch@wisc.edu
Katie Pfankuch is a graduate of Lakeland University and joined the Arboretum in March of 2018. She coordinates the details of the Visitor Center, which includes indoor and outdoor events, the bookstore and the Steinhauer Trust Gallery. She enjoys the smell of lilacs in May and the vibrant colors of the flowers in the Wisconsin Native Plant Garden during the summer. Her favorite part of the Arboretum is all of the natural wildlife she encounters each day.

Michael Hansen, Land Care Manager
608-262-3289, 608-225-3995  |  michael.hansen@wisc.edu
Michael joined the Arboretum land care crew in August 2006. Prior to that he worked for The Nature Conservancy, the Illinois DNR, the Virginia Department of Conservation, and a private restoration contractor in Wisconsin. He gets most excited about prairie ecology and management, but over the years has come to appreciate the woodlands and wetlands, too. His favorite parts of the Arboretum are the remnant prairies and oak savannas of the Grady Tract as he feels they best represent what Dane County would have looked like before European settlement.

David Stevens, Longenecker Horticultural Gardens Curator
608-890-4825  |  david.stevens@wisc.edu
David joined the Arboretum staff in 2015. Prior to that, he spent 13 years working in the field of forest tree genetics with the UW–Madison Forest and Wildlife Ecology Department. David has a BS in horticulture from Virginia Tech and an MS in horticulture from UW–Madison. When not at the Arboretum, he manages his family’s certified organic farm by Baraboo. Outside of the gardens, his favorite Arboretum site is the Spring Trail Pond area, with its mixture of secluded open spaces and historic stonework.

Susan Carpenter, Wisconsin Native Plant Gardener
608-262-2445  |  susan.carpenter@wisc.edu
On the Arboretum staff since 2003, Susan teams up with garden designer Darrel Morrison, staff colleagues, students, and community volunteers to care for and monitor the Wisconsin Native Plant Garden—which is used for learning, inspiration, and enjoyment. She values how everyday garden observations, chance events, and new questions lead to rich educational opportunities, research, and community participation in science and stewardship. Her favorite Arboretum hikes are the 10K route around Lake Wingra and slower walks through prairie, savanna, woodlands, and gardens while photographing bumble bees.

Tom Bresnahan, Restoration Technician
608-262-3289 | tbresnahan@wisc.edu
Tom graduated from UW–Madison in 2016 with a conservation biology major and a certificate in environmental studies. He has worked for the City of Madison’s forestry and conservation department and also has experience in arboriculture. Working at the Arboretum allows him to restore land back to its native state and to reduce and eliminate invasive species. His favorite part of the Arboretum is Greene Prairie due to the high diversity of prairie plants.

Zane Fuller, Horticultural Technician
608-262-3289 | zfuller@wisc.edu
Zane graduated from Ohio State University in 2019 with a degree in forestry. After spending a summer as a restoration crew leader for The Prairie Enthusiasts, he joined the Arboretum staff in the fall of 2019. Zane enjoys the diverse opportunities to gain new knowledge and skills that come from working at the Arboretum. His favorite spot in the Arboretum is among the firs on the eastern side of the pinetum, especially on a calm sunny day when the scent of the conifers is strongest.

Christopher Kregel, Restoration Technician
608-262-3289 | christopher.kregel@wisc.edu
Christopher began his restoration career in 2008 after getting a bachelor’s degree from the University of Minnesota in agricultural industries. He has worked for many different nonprofits including The Nature Conservancy and the Ice Age Trail Alliance. Christopher started working for the Arboretum in 2013. He loves working here because he gets to continue his passion of increasing habitat for species of high conservation value. Christopher’s favorite parts of the Arboretum are Wingra Oak Savanna in spring, the Wingra Overlook Prairie/Wingra Woods area, and the Grady Tract.

Stephanie Petersen, Ranger
608-262-2746 | smpetersen2@wisc.edu
Stephanie joined the Arboretum staff in February 2018. Prior to that she worked with various conservation corps in Idaho, Iowa, Texas, and West Virginia. In 2012 she received her bachelor’s degree from the University of Iowa in Environmental Studies and Art. Stephanie’s favorite part about working here is being out on the trails everyday interacting with visitors. Her favorite place in the Arboretum is Wingra Woods and she especially enjoys the cultural history of the effigy mounds.

Lance Rudy, Restoration Technician
608-262-3289  |  lrudy2@wisc.edu
Lance graduated from Iowa State University in 2014 with a bachelor’s degree in wildlife ecology. After college, he worked for Conservation Corps Iowa doing land restoration for various organizations. He joined the Arboretum in 2016 as a restoration technician. Lance’s favorite part about working here is being able to create native habitat for wildlife and getting to restore the amazing land that the Arboretum has to offer. His favorite area is the Grady Tract because of its diversity of plants and habitat types.

Gail Epping Overholt, Education Coordinator
608-262-5522  |  gail.overholt@wisc.edu
Gail joined the staff on January 11, 2017, Aldo Leopold’s birthday. She chose thae date specifically for that significance. A personal goal for Gail is to help people of all ages see the “land” as a community of soil, water, and living organisms—not excluding people. Having a special affinity for looking at issues with her eyes on the water, she looks forward to getting to know the Arboretum by canoe or kayak as well as the trail. It’s a wonderful reminder of the interconnectedness and interdependence of the land community—not excluding ourselves!

Lisa Andrewski, Family Nature Program
608-265-5872  |  andrewski@wisc.edu
Lisa began working at the Arboretum in 2013 as a student ranger. After graduating she joined the Arboretum education team and leads tours, puts together the Arboretum’s monthly Family Nature Programs, and organizes the weekend naturalists who lead the Sunday public tours. Spurred on by the writings of Aldo Leopold, Lisa is a passionate advocate for conservation and restoration ecology. She is constantly motivated by being surrounded by Leopold’s legacy.

Marian Farrior, Restoration Work Party Manager
608-265-5214  |  marian.farrior@wisc.edu
As the restoration work party manager since 2002, Marian has organized and led the volunteer work parties and the restoration team leader training program at the Arboretum. She has worked in the environmental field as a consultant and educator for over 25 years. At the Arboretum, she has taught classes about pattern in nature, biomimcry, permaculture, and forest garden design, and she co-leads the Wisconsin Master Naturalist volunteer training course. She is grateful for all the dedicated volunteers who help tend this urban oasis, where native plants flourish and wild critters thrive.

Judy Kingsbury, Volunteer Program Coordinator
608-262-5604  |  judith.kingsbury@wisc.edu
Judy started at the Arboretum as a volunteer with Earth Focus Day Camp. She has worked as a naturalist and ranger and became the volunteer program coordinator in 2002. Judy enjoys working with volunteers and her fellow employees to take care of this special and significant place. Some of her favorite sites include Teal Pond, West Curtis Prairie, and the bench in the Longenecker Horticultural Garden’s pinetum.

Jennifer Mitchell, Precollege and Community Education Specialist
608-265-5872  |  jennifer.mitchell@wisc.edu
Jennifer has been at the Arboretum since 2007. Her favorite part of her job is working with the children, youth, and families that participate in our programs because she loves sharing her love of outdoor discoveries with others. Jennifer enjoys the Arboretum in all seasons—the golden yellow of the maple trees in Wingra and Gallistel woods in the fall, the stillness of Icke Boardwalk in the winter, the frogs calling from the ponds in the spring, and the gardens and prairies in the summer.

Brad Herrick, Ecologist, Research Program Manager
608-263-7344  |  bradley.herrick@wisc.edu
Brad joined the Arboretum staff in 2007. He is a plant ecologist and particularly enjoys spending time in wetlands, prairies, and oak savannas. His research interests include plant community ecology, jumping worm biology and ecology, and environmental monitoring. He feels lucky and humbled to work alongside and learn from passionate and dedicated colleagues. His favorite Arboretum moments are the unexpected encounters: watching a coyote trot through Longenecker Horticultural Gardens, listening to a Great Horned Owl call in the Lost City Forest, or silently watching a red-headed woodpecker dance around a snag looking for a meal.

Christy Lowney, Research Specialist
608-265-0535 | clowney@wisc.edu
Christy joined the Arboretum during the summer of 2016 as the Ranger. In this position, she enjoyed being able to explore the trails and observe seasonal changes across the landscape. In late 2017, she transitioned into the position of research specialist, which more closely aligns with her background in forest ecology. Every year she looks forward to the spring wildflowers and baby wildlife sightings.

Nancy Sheehan, Citizen Science Coordinator—Journey North Program
608-890-0948 | nsheehan@wisc.edu
Nancy joined the Arboretum in fall 2018 after managing the Rock River Coalition volunteer stream monitoring program for seven years. Nancy is passionate about citizen science. She earned a master’s degree in environmental management from Yale University. She also served in the Peace Corps in West Africa and, after working in the field of international development, moved to Madison to pursue further graduate studies at the UW–Madison Nelson Institute of Environmental Studies. Nancy lives in a Lake Wingra neighborhood. She has many cherished memories of visiting natural springs, listening to sandhill cranes, and cross-country skiing in the Arboretum.

Friends of the Arboretum