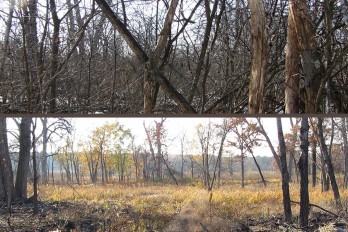 Looking west toward Curtis Prairie across wetlands and oak savanna, before (top) and after (bottom) clearing European buckthorn.

Most plant species in the Arboretum’s prairies, oak savannas, and wetlands grow best with a lot of sunlight. A major land management issue in these areas is overabundant trees and shrubs, which suppress and prevent the growth of shade-intolerant grasses and wildflowers. Both exotic (e.g. honeysuckle, European buckthorn) and native (e.g. sumac, dogwood, trembling aspen) species can be problematic. Trees and shrubs can take over an area for several reasons, including lack of fire (although some species are stimulated by fire), altered hydrology, and seed inputs from outside the Arboretum boundaries.

Arboretum land care staff and volunteers reduce unwanted trees and shrubs primarily by cutting with loppers, hand saws, chainsaws, brush saws and rotary mower tractor attachments. Once cut, the leftover materials are sometimes left to decompose, but usually they are run through a wood chipper and the chips are used as mulch in the horticultural areas or to resurface trails. On Arboretum lands outside the City of Madison, cut trees and shrubs are sometimes stacked and burned on-site during the winter when snow cover is present. Stumps and resprouts are treated with herbicide to kill the root system and prevent regrowth.

To efficiently clear a large area of overgrown land, staff may bring in a forestry mower. A forestry mower, often mounted on a skid-steer loader, can quickly cut through many small trees and shrubs. The mower grinds the woody material as it goes, leaving wood chips in its wake. The chips are left to decompose but can also be treated with prescribed fire to speed up the process. The Arboretum has used a forestry mower to clear some larger areas at Curtis Prairie, Greene Prairie and other savanna areas in the Grady Tract, and Teal Pond Wetlands.

Ecological restoration is the primary reason for removing trees and shrubs from Arboretum lands. In addition, there is utility right-of-way that requires periodic clearing. The edges of trails and service roads may also be cleared to facilitate prescribed fire. The property is routinely monitored for dead and dying trees; those considered potentially hazardous are removed before they fall to reduce risk to people and property. Land care staff are also selectively and pre-emptively removing ash trees now that the emerald ash borer has arrived in Madison.