The Ecological Society of America (ESA) has compiled fact sheets about ecological issues and concepts, including fire ecology. 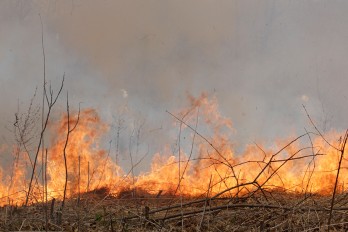 Fire has been an important ecosystem process for thousands of years. Along with climate and topography, it has significantly shaped Wisconsin’s plant communities. Fire can have both positive and negative effects on plant species depending on season, fire intensity, and frequency of recurrence.

Prior to European settlement, landscape fires were much more common in Wisconsin than they are today. Started by either lightning strikes or Native Americans who used them as tools in hunting and war, fires could burn uninterrupted for days, consuming tens of thousands of acres. When settlers arrived in the early 1800s, they began displacing the Native Americans from land they considered desirable for industry or farming, pushing them west or onto reservations. The settlers divided the land with roads, towns and farms, taking measures to suppress most fires that did occur. The large fires that burned every few years (sometimes every year) became rarer and smaller scale, and eventually all but disappeared from the landscape.

In ecological restoration, re-establishing processes such as fire to the ecosystem is vital to restoring the plant and animal species that inhabit it. Land managers accomplish this through prescribed burns: fires that are deliberately set and applied within specific parameters to safely meet the defined objectives of a burn plan developed for a specific area. When conducted appropriately, prescribed fire is a very important and useful tool for land care.

The fire’s prescription and objectives are described in a burn plan, which is developed for each burn unit (i.e. the area to be burned). The prescription defines parameters for a safe and successful fire. Some important parameters are air temperature, wind speed, wind direction, and relative humidity. In addition to restoring an ecological process, objectives of prescribed fire include research, reducing the accumulation of fuel (which could make an accidental fire more dangerous), stimulating seed production, reducing abundance of invasive species and promoting fire-adapted species. The burn plan also contains important information such as required permits, a site description, crew and equipment list, contingency plan, and smoke management plan.

Arboretum staff have been burning Arboretum lands for restoration and research for decades. In fact, pioneering research was conducted by John Curtis and Max Partch at the Arboretum in the 1940s documenting the importance of fire to prairie restoration. The Arboretum’s current prescribed fire crew comprises approximately twelve staff members, all of whom have completed the  National Wildfire Coordinating Group’s entry-level Wildland Firefighter Training and Introduction to Wildland Fire Behavior courses. Some have training beyond the entry-level courses. Occasionally, trained staff from other organizations will assist the Arboretum crew. Crew members wear fire-retardant clothing and communicate with two-way radios as they are spread across an area during the burn. Members of the fire crew also use hand tools such as drip torches, backpack water pumps, fire rakes, and rubber flappers.

The Arboretum uses two four-wheel drive pickup trucks that can be equipped with 150-gallon-capacity pumper units and two utility vehicles that can carry a 50-gallon pumper unit. Pumper units are used to extinguish fire and smoldering materials, as well as to reinforce firebreaks that hold the fire within the prescribed area.

Over the last 25–30 years, approximately 100 acres of Arboretum lands are treated with prescribed fire every year. Currently there are around 20 areas (including outlying properties) that are managed with regular prescribed fire by the Arboretum crew. Over the next several years, we hope to expand our prescribed fire program by restoring fire to 8–10 additional areas where it has been absent for a long time.