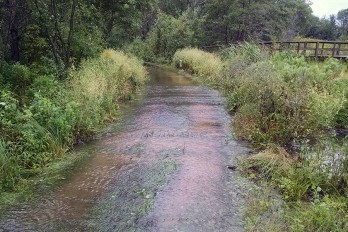 Most of the Arboretum lies within the Lake Wingra watershed. Prior to European settlement, much of the rain and snow that fell in the Wingra watershed soaked into the ground before reaching what is now the Arboretum. Today, due to urbanization, there is not enough open land to absorb the approximately 470 million gallons of rainwater and snowmelt that is produced annually. Instead, the majority of it flows over impervious surfaces such as roofs, roads, and sidewalks, carrying with it sediments from erosion and winter road care; pollutants from roads, parking lots, yard care, and buildings; nutrients such as phosphorus and nitrogen from fertilizers and yard and animal waste; and seeds of invasive species. Storm sewers transport the runoff to waterways and natural areas. The Arboretum lies at the bottom of the Lake Wingra watershed and receives millions of gallons of stormwater each year—this water courses through wetlands and natural channels that have been eroded by runoff, ultimately feeding into Lake Wingra or Wingra Creek.

There has been growing awareness over the last several decades that stormwater runoff can have a substantial destructive impact on natural lands and waterbodies. Examples include: toxic blue-green algae blooms in lakes, wetland plant diversity shifting from predominantly native to invasive species, and wetlands choked by sediments. Municipal areas, Madison included, have undertaken efforts to minimize and mitigate the impact by building stormwater management facilities and encouraging stormwater infiltration in the watershed.

The Arboretum’s stormwater detention ponds are designed for flow control, sediment removal, and nutrient removal, especially phosphorus. Several stormwater facilities have been constructed at the Arboretum in partnership with the City of Madison, Town of Madison, City of Fitchburg, and Wisconsin Department of Transportation, to improve the quality of stormwater before it pulses through the property. Recent research has examined the effectiveness of native plantings in constructed treatment ponds and wetlands, as well as the use of alum (aluminum sulfate) in stormwater ponds to bind and trap phosphorus to keep it out of lakes. However, these protections and studies have not yet provided all the needed solutions. The sheer volume and flow of stormwater, and the nutrients and invasive species seeds that are not trapped by detention ponds, continue to present many land management challenges for the Arboretum as we attempt to preserve and restore native habitats in an urban environment.