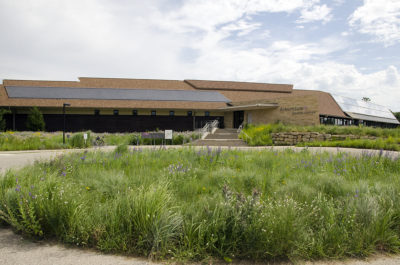 The Arboretum Visitor Center will get long-awaited upgrades to the east wing this August. Beginning mid-month, Rock Church Construction will remove the old roof and solar panels, install a new roof, and replace the windows.

The east wing was the original public visitor building, which opened in 1977 as the McKay Nature Awareness Center (the west wing is an addition that opened in 2001). The outdated solar hot air panel system was designed and installed in 1977 and began operating in 1978. The collected hot air is stored in a rock bed in a basement room of the Visitor Center. The room will be cleared out as part of this project; it will be used for much-needed storage space and the rocks may be repurposed for trail improvements. The windows in the first-floor classrooms, offices, and hallway of the east wing are also original to the building and will be replaced with new energy-efficient windows.

Modern solar panels will be installed in the coming months as a separate project that is currently out for bid. A Solar for Good grant will help cover the costs of the panels themselves, and a generous $25,000 donation from Friends of the Arboretum will help pay labor and installation costs. Additional funding has come from private donors, and we are working to raise additional funds needed for the project (approximately $15,000). If you are interested in donating toward the solar panel project, please contact Erica Lee at ealee7@wisc.edu or (608) 263-7889.

During construction, the deck and classrooms will be closed, and access to the east hallway will be restricted. Some native plant garden areas around the Visitor Center may also be restricted for portions of the construction. The project should wrap up in mid- to late September.