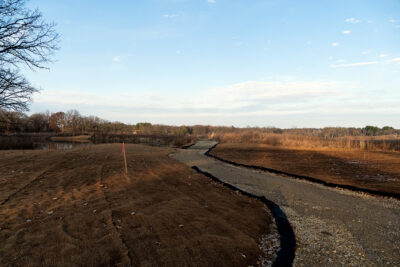 October marked the completion of the rehabilitation of the Curtis Prairie stormwater detention pond that began in March, the last of the major stormwater management projects in the UW–Arboretum. Curtis Pond was created in 1970 to minimize the erosion and sedimentation caused by about 17 million gallons per year of stormwater runoff from 165 acres of urban and Arboretum upland. By the early 2000s, Curtis Pond had filled with sediment and was no longer protecting the downstream prairie and wetlands as incoming sediment, along with phosphorus and toxins, were carried into Curtis Prairie. Over time, sediment can fill in wetlands and other downstream areas, and the excess phosphorus and toxins can threaten ecosystem health, from diminishing plant diversity to polluting drinking water.

This year, with support from the State of Wisconsin, the City of Madison, and the Wisconsin Department of Transportation (WDOT), the Arboretum was able to restore the pond to its original condition. The primary project components—rehabilitation of Curtis Pond, removal of the reed canary grass area downstream of the pond, and the clearing of weedy trees and shrubs in the northeast Grady Tract—align with the long-term restoration goals of the Arboretum. These goals include sustaining and, where possible, increasing native plant abundance and diversity and decreasing invasive species.

More than four thousand cubic yards of accumulated sediment was removed from the pond, and the collapsed stormwater inlet flume was replaced by an underground storm drain. A trash and sand collector (now visible south of the pond) was built by WDOT to trap street sand and debris before it enters the pond. Now that Curtis Pond is back to full capacity, the sediment, phosphorus, and toxins will settle out before the stormwater flows out from the pond into Curtis Prairie.

Downstream of the pond, in central Curtis Prairie, a one-acre area of long-term sedimentation had become infested with reed canary grass (Phalaris arundiancea). Reed canary grass is considered the most invasive species in Wisconsin’s wetlands. This non-native grass spreads by underground roots and forms dense stands that out-compete native plants for space and resources. Decades of frequent flooding and stormwater inundation deposited untold amounts of sediment, nutrients, and grass seeds. As the invasive grass established and expanded it displaced dozens of native species of sedges, grasses, and prairie flowers.

Over the years Arboretum land care staff and researchers undertook many efforts to manage the reed canary grass, such as using prescribed fire as well as herbicide, mowing, and inter-seeding native species. All proved futile. The Curtis Pond project offered an opportunity to mechanically remove the reed canary grass and six to eight inches of underlying sod containing the plant roots. About a thousand cubic yards of accumulated sediment and plant material was excavated and hauled off site, and thousands of sedge, grass, and wildflower seedlings were planted and additional seeds were sown to restore the native plant diversity.

Other areas disturbed by the construction have also been seeded and covered with brown erosion control matting. By next summer those areas will covered with native plant growth.

Project funding was also available to repair a deteriorated stormwater inlet pipe to Coyote Pond in central Curtis Prairie. An epoxy liner was installed in the existing pipe, eliminating the need to trench between the highway and Coyote Pond and thus limiting the amount of disturbance in that part of Curtis Prairie.

South of the Beltline, runoff from storms and snow melt in the northeast Grady Tract enters a drain adjacent to the south entrance of the pedestrian tunnel and is then conveyed under the Beltline to Curtis Pond. Prior to the pond rehabilitation project, this area consisted of weedy trees and invasive shrubs and wildflowers, and few native plants. The thick tree and shrub canopy blocked sunlight from reaching the ground and few understory plants were able to grow, leading to highly erodible bare soil. Over decades, heavy rains moved this soil into the pipe that feeds Curtis Pond, adding more sediment to the quickly filling pond.

To reduce erosion and increase native plant diversity, the weedy trees and shrubs were removed, invasive wildflowers were treated with herbicide, and a meadow has been planted to receive and filter surface runoff before it enters the drain. Erosion blankets will hold the soil in place while the new plants establish. This prairie opening will not only stabilize the soil with deep rooted native species but also dramatically increase the plant diversity. The newly restored area can also serve as a starting point for subsequent restoration projects to expand native plant diversity into the surrounding areas.

It will be several years before the newly restored areas fully flourish. During this time, the areas will be fenced off and trails will be closed to protect the new plantings. Please help them thrive by staying on designated trails. And visit the Arboretum frequently to check on the growth of these new restorations!