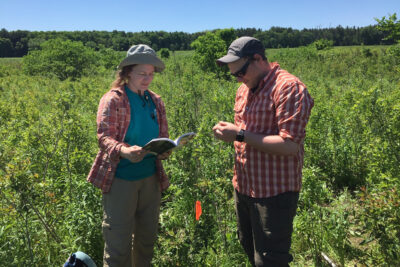 The science of restoration ecology traces its beginning to the UW–Madison Arboretum with the first attempt to turn an abandoned field into a tallgrass prairie. That experiment is now known as Curtis Prairie. More than 85 years later, the 72-acre restoration continues to be an important site for research, education, and conservation.

The idea to restore a prairie at the Arboretum is generally attributed to Aldo Leopold. It was part of implementing his broader vision to re-create the forest, oak savanna, and prairie ecosystems that had covered southern Wisconsin before European settlers claimed and converted ancestral Ho-Chunk land for intensive agriculture.

Ecologist John Thomson oversaw the initial plantings of native prairie species, and John Curtis later conducted ground-breaking research on the process of restoration and plant community ecology. Curtis Prairie was named in his honor in 1962.

Since those early restoration days, the plants, soil, and wildlife in Curtis Prairie have been well studied as part of hundreds of education and research projects, including dozens of master’s and doctoral degrees. Among these projects are recurring vegetation surveys. These monitoring projects provide information such as the number, abundance, and distribution of native and non-native plant species. By comparing these data to those collected in previous surveys, researchers and land managers can track changes in the plant community over time. This information is invaluable to help inform future management and restoration efforts. Since 1951, the vegetation has been surveyed seven times, with 2002 being the last complete survey.

This year, Mary-Claire Glasenhardt and Isaac Bailey, two master’s students from the Nelson Institute for Environmental Studies at UW–Madison, are resurveying the site. Mary-Claire’s research will examine changes in the vegetation community and build on data from earlier surveys. Isaac’s research will analyze spatial relationships between soil moisture, topography, and vegetation. Flagging for their project is visible throughout the prairie. We look forward to highlighting Mary Claire and Isaac’s work in future articles.