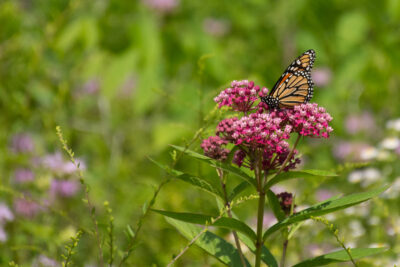 I spent much of the last week of July talking to reporters about the recent announcement from the International Union for the Conservation of Nature (IUCN) about the status of monarch butterflies. The IUCN, which includes over 1,400 member organizations around the world, maintains a Red List of Threatened Species that categorizes species and their risk of extinction based on scientific evaluation. The IUCN has evaluated almost 150,000 species and determined that more than 41,000 are threatened with extinction. These species are further divided into Vulnerable, Endangered, and Critically Endangered categories. Based on existing threats to monarchs, trends in their numbers, and a target population size that is considered to be necessary for stability, the IUCN determined that migratory monarchs are Endangered.

This listing is different from a listing under the Endangered Species Act (ESA) in the United States. Species that are listed as threatened or endangered under the ESA are given specific legal protection laid out by the U.S. Fish and Wildlife Service, with the goal of increasing the population size until the species is no longer at risk of extinction. The IUCN listing carries no regulatory authority but is instead a tool meant to catalyze conservation action – focused, science-based recovery efforts by government agencies, non-government organizations, and individuals.

While I’m sorry that monarchs have reached this level, I am hopeful that the attention received by the IUCN assessment will make a difference for monarchs as well as the hundreds of other pollinators, native plants, and organisms that share their habitats. I’ve been on a team of scientists that reviewed the IUCN assessment over the past few years, and I am impressed by the wealth of information that was amassed and evaluated by the team. This designation of a species that we welcome and monitor every spring and summer is a good reminder that our work to protect and restore habitat is important. While we focus on plants, these plants provide the food and shelter needed by so many organisms—some of which, like the monarch, need all the help they can get.

You too can support monarchs and other pollinators by replacing lawn areas with native plants. This can include some of the many milkweed species native to Wisconsin, to support monarch caterpillars that only eat milkweed, as well as native flowering plants that provide nectar for the adult butterflies.

From now until August 7 you can also join Journey North or Monarch Larva Monitoring Project volunteers in an International Monarch Monitoring Blitz to help us better understand how monarchs are doing and what we can do to help them.

Whether you monitor monarchs or other organisms at the Arboretum, help in the Native Plant Garden, or support other aspects of our work, your efforts are important. Thank you!