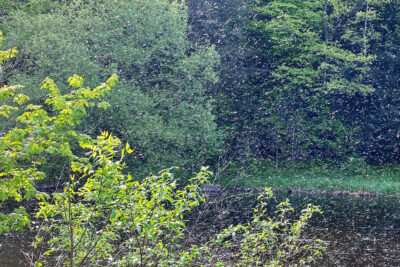 Following up on recent musings about large aggregations of animals, I saw hundreds of thousands of mayflies over the Memorial Day weekend. They filled the air for 50 or so meters around a bend in the Embarrass River in east central Wisconsin. The insects darted quickly about, with females flying into the swarm where mating began in flight. Coupled pairs moved out of the swarm and onto vegetation.

Large mating swarms are just the most visible indication of amazing mayfly biology. After mating, adult females lay their eggs in flowing water, where the nymphs molt several—sometimes dozens—of times. In the last nymph stage, called subimago, they emerge out of the water with wings. They live in this penultimate winged stage about a day and then molt into the adult, or imago, stage. Mayflies are the only insects that molt again after they gain wings. Their presence usually indicates a clean river, since the eggs and nymphs are susceptible to many pollutants.

Some species of immature mayflies can live for multiple years as they grow and molt, feeding on algae, diatoms or detritus in flowing water, and may themselves be eaten by fish and other aquatic insects. Once they emerge from the water, the adults often fall prey to spiders or birds. I watched a pair of robins feed mouthfuls of mayflies to their hungry brood on the same day.

The scientific name of the Mayfly order says a lot: Ephemeroptera (from the Greek ephemera, for short-lived, and -ptera, for wings). Adults in this ancient insect order all have an ephemeral winged stage. Their life as an adult is so short that they don’t have any functional mouthparts and live only for a day or maybe two—just long enough to mate and lay eggs. And here, for me, was the clincher that made this aggregation so amazing: somehow, after all of that time living as nymphs in the water, they synchronize their emergence to one or a few days, often in May.

There are about 3,350 species of mayflies in the world, and about 600 in the Americas north of Mexico.

The sight of so many mayflies inspired a poem by my mom: