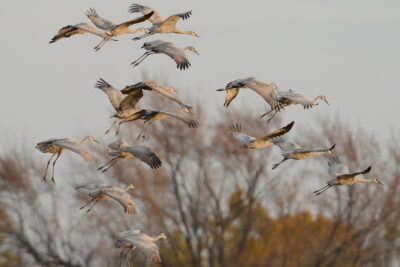 I checked something off my bucket list last week: I went to Nebraska to see sandhill cranes gathering in and around the Platte River. The sight and sound of hundreds of thousands of cranes together – Audubon’s Rowe Sanctuary estimated 546,000 during the time I was there, despite wind, sleet, and rain – was unforgettable.

I’ve seen small crane groupings during fall tours at the Aldo Leopold Foundation. I love to watch spring pairs and then summer families with awkward colts at the Arboretum. And I always celebrate the day I see cranes return here (March 1 this year). Somehow, a world that can support so many of such an amazing animal seems a bit more hopeful. And being familiar with the Arb pairs that return every year made seeing the Platte River aggregations more special, even though they were not headed toward Wisconsin but to breeding sites to our north and west. According to the Cornell Lab of Ornithology, “our” cranes spend the winter in Florida, while the ones that stop along the Platte come from Texas and northern Mexico.

Watching thousands of cranes in the air, in fields full of corn stubble, and standing in the river evoked similar feelings I’ve had seeing other large animal aggregations. My first sight of monarch colonies overwintering in Mexico in 1997 brought tears to my eyes and an understanding of what it means to feel breathless with wonder. Monarch numbers in the colony I studied that year are estimated at around 170 million. I won’t forget the impact of that initial sighting even though I’ve been back many times. The experience was even more special because I was knew a lot about monarchs. Perhaps walking up a steep mountain at high altitude also intensified the experience.

In 1999, I took a group of middle and high school teachers and students to Texas to study monarchs. We stayed at the Selah Ranch, 5,500 acres of restored grassland in the Hill Country that has been owned and run by David Bamberger and his late wife Margaret. Margaret and David loved bats. They took our group on a tour to Bracken Cave, where more than 15 million Mexican freetail bats live in the world’s largest bat maternity colony. Around sunset, bats poured out of the cave, filling the sky above us for what seemed like hours as they hunted and fed on an estimated 100 tons of moths. The walk was easy and the weather wonderful, though the smell from the ammonia given off by decomposing bat droppings was strong. The experience was still breathtaking.

We’re still learning why animals aggregate. In some cases, they’re attracted to a location because it has a high concentration of needed resources like food or an ideal climate. Cranes have come to the Platte River for millennia. The river, named for the French word for plate, or flat, has been described as a mile wide and an inch deep. Before the surrounding lands were drained for agriculture, the river was surrounded by wet prairies full of abundant crane food. Now the birds eat leftover corn in the surrounding fields instead of the seeds, berries, insects, mice, and frogs they ate in the past.

The shallow river also provides a safe resting place at night, probably deterring predators or at least making their advance noisier. In addition, large groups benefit from what is called predator swamping. Predators might be attracted to the potential success of hunting among a big group; if you’re one of 500,000 cranes the likelihood of being eaten is low. And you can benefit from the vigilance of your neighbors. I saw this effect last week—as a group flew in and settled into a large tightly-packed mat on the river, one crane was spooked, and the whole group flew up. This behavior, called a “startle cascade,” occurs in both fish schools and bird flocks.

Monarchs have the perfect overwintering conditions in Mexico – it’s cool enough to slow their metabolism until conditions are right for breeding but warm enough that they don’t freeze. In a study I did almost 20 years ago with a climate modeler, we learned that the microclimatic conditions in the Mexican wintering sites are actually very rare, and monarchs really are finding the small area that will keep them alive. Recent studies have documented thermal benefits to clustering together on trees, and predator swamping may be at play as well. Wintering monarchs are eaten by black-backed orioles and black-headed grosbeaks, and the forest floor is littered with monarch remains. Being one in 160 million is probably a good thing.

Cold temperatures also benefit bats in winter when they enter a metabolism-slowing torpor. But when females are nursing young and leaving them every night to forage, cold temperatures are a problem. By roosting in a large group, bats share body heat and maintain a constant temperature. They also benefit from predator swamping. We noticed hawks and owls hanging out near the cave’s entrance, waiting for the first bats to emerge around sunset. But if you’re one of 15 million bats, your odds of being eaten are small. There is probably some jockeying for position in the cave, with a tradeoff between wanting to go out and catch lots of moths but not wanting to be the first out to meet the waiting raptors.