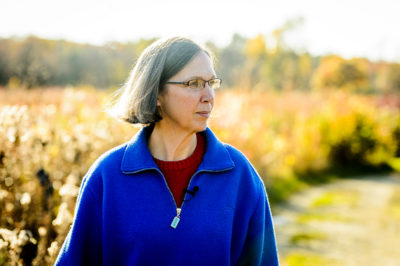 Working for the Arboretum, with its long history of excellence, is an honor. While my four years here is just a drop in that history bucket, I’ve loved learning about – and from – the people who have made the Arboretum what it is, and how programs started decades ago are now integral to the fabric of the institution.

Luckily, there are abundant resources about our history: books, like Frank Court’s Pioneers of Ecological Restoration; archival materials; and the memories of people who have been a key part of that history.

This August, Sue Bridson, a long-time Arboretum naturalist, retired. Bridson has been part of the Arboretum for roughly half of our almost 90-year history. I took this opportunity to sit down and talk with her and then delve back into Court’s book to refresh my knowledge about our naturalist program.

If you’ve come on weekend walks, enrolled children in our summer camp program, visited our “ask a naturalist station” during the pandemic, or visited with a school group, you’ve benefited from the knowledge and teaching skills of Arboretum naturalists. There are currently 18 active naturalists, and many of them have been here longer than any of our full-time staff.

Jim Zimmerman became the first Arboretum ranger-naturalist in 1965. “Jim Zim” started leading two-hour weekend tours and they were immediate hits. From a nature study group he organized, he recruited Rosemary Fleming and Virginia (Gina) Kline to help. Fleming became his assistant in 1965 or 1966, with six months of start-up funds from Friends of the Arboretum (FOA), and later support from Dane County as a “Dane County Naturalist” housed at the Arboretum. She kept this job until her retirement in 1981.

Fleming started the official Arboretum guide program in 1966, with 12 guides and funding, again, from FOA. By 1969, thousands of people were attending guide-led tours every year, and a summer day camp for children was started in 1969. Fleming and Zimmerman also led a guide training program with a series of courses that qualified participants for seasonal employment at other area nature centers, including school forests.

Sue Bridson moved to Madison with her family in 1972 and began working as an Arboretum guide around 1975. She liked this job so much that she went back to school and graduated with a second undergraduate degree, in Natural Resources, in 1982. According to Bridson, she “wanted to be like Rosemary.” She recalls that there were about 10 guides when she came and, until Ken Wood joined the group in 1986, all were women. They worked with school groups during the week, when they were called guides, and gave tours on weekends, when they were called naturalists.

Bridson worked as the guide coordinator for a year and helped run the Winter Enrichment program, which was first organized for the guides and Arboretum staff in 1968, meeting in the old Civilian Conservation Corps barracks. Winter Enrichment moved to the classroom when the McKay Center was built in 1977, and then to the auditorium when the addition to the Visitor Center was completed in 2001. As the program space grew more members of the public could attend, but Winter Enrichment is still heavily attended by Arboretum naturalists and staff.

Sue Bridson has been a part of the fabric of the Arboretum in other ways. Along with her husband, Bill, she was an Arboretum steward. She also served as president of FOA in the early 1980s, when Katharine Bradley was the Arboretum director.

Like many other naturalists, Sue is a direct link to people who started Arboretum programs decades ago and have continued to the present. These programs have adapted to changing societal needs, space availability, and technology while maintaining the vision exemplified by Rosemary Fleming, who said, “The best insurance for securing and maintaining Arboretum goals is an educated and concerned public.” As noted by Gail Epping-Overholt, the current education unit manager, “Sue has inspired so many people in so many ways – colleagues as well as program attendees, students, and teachers. Her legacy, and that of all Arboretum naturalists, is spread throughout the field of outdoor education in south central Wisconsin.”