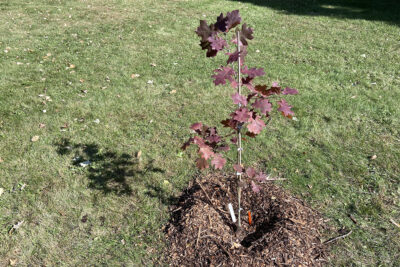 While most people think of spring as ideal for planting trees and shrubs, fall is also a great time to plant woody plant species. In southern Wisconsin, mid-August through mid-October is generally the perfect window to plant. Cooling air temperatures put less stress on plants, while still-warm soils and relatively abundant precipitation promote root growth and establishment. The rule of thumb is to plant at least six weeks before the ground freezes. Generously mulching the root area further reduces moisture stress and insulates the ground to delay freezing. This allows the plant to establish a strong, well-developed root system before resuming top growth in the spring.

This past fall, we planted two exceedingly rare tree species in the Longenecker Gardens’ living collection. The maple-leaf oak (Quercus acerifolia) only occurs naturally in four small, fragmented upland forest areas in Arkansas. It was first described in 1927 as a variety of the Shumard oak (Quercus shumardii); upon further study, it was elevated to species designation in 1990.

The maple-leaf oak is relatively small and can grow as a stunted multi-trunked shrub or as a single-trunked tree up to fifty feet tall. Its acorns are 40 percent smaller than the Shumard oak’s, and its upper leaves are as wide or wider than they are long, with three to five lobes, resembling a sugar maple leaf.

The Arboretum received four trees grown from acorns collected by the Dawes Arboretum, which had come from four different wild populations – three from the Magazine Mountains and one from the Pryor Mountains. Of the four trees, one is exhibiting the shrub-form phenotype. Though the species is listed as cold hardy to USDA Zone 5, little is known about its true cold hardiness. The Arboretum’s plantings will test this.

Another exceedingly rare tree species planted this fall is the Franklin Tree (Franklinia alatamaha). First discovered in 1765 by father and son botanists John and William Bartram, the species was growing along the Altamaha River near Fort Barrington in what was then the British colony of Georgia. The plants were common across a three-acre area and John noted them as “curious shrubs” in his travel journal. William returned to the plants when in the area from 1773 to 1776 and collected propagules, which he brought back and planted at the family’s farm in Philadelphia in 1777. After several years of study, he decided to give what he called the “rare and elegant flowering shrub” a new genus designation, Franklinia, in honor of family friend Benjamin Franklin. The species designation honors the original spelling of the Altamaha River, where it was discovered. William returned to the area once more after the American Revolution but found no trace of the species. The last verified wild sighting of the species was in 1790 by Dr. Moses Marshall, a distant relative of the Bartrams.

Franklinia is in the Tea family (Theaceae) and its flowers closely resemble those of Camellia. Both its rareness and disappearance are still botanical mysteries. Plants from William Bartram’s collection have been grown successfully from Maine to Florida; however, the species is notoriously difficult to grow as it is highly prone to root rot. It also prefers well-drained acidic soils, protection from wind, and partial shade.

The maple-leaf oaks can be found in the Longenecker oak collection. The Franklin Tree can be found near the southeast corner of the newly refurbished Civilian Conservation Corps barracks, east of the Visitor Center, where it was planted in hopes of meeting its unique siting preferences.