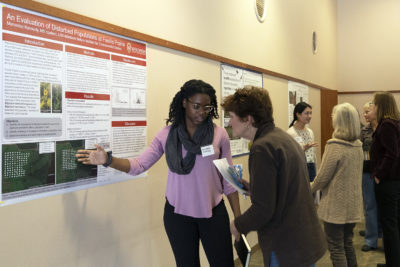 On Thursday, February 13, UW–Madison students presented their Arboretum-based research projects to more than 100 people at the twentieth-annual Arboretum Research Symposium. During student talks, the audience learned about the impact of climate change on conifer trees; the history of forest succession in Noe Woods; a study about interactions between invasive jumping worms and toads; and approaches to engaging communities about urban water issues. Other students presented posters about prairie restoration and bumble bees, monitoring monarchs, post-flood recovery of prairie plants at Faville Prairie, and the interaction of jumping worms and invasive honeysuckle. Half of the presenters are recipients of Arboretum Research Fellowships that aid their research.

Rachel Jordan explained different strategies conifer trees employ to survive winter conditions and how these strategies might be impacted by a changing climate. Rachel is conducting greenhouse trials on campus as well as field experiments at the Arboretum, outlying properties managed by the Arboretum, and other sites throughout Wisconsin.

Jared Beck shared results of a tree survey of Noe Woods. His survey is the latest in a 63-year monitoring project that tracks forest structure and composition. Over this period, the forest has transitioned from a semi-open woodland to a closed forest, with a conspicuous decline in the number of white and black oaks. Other fire-intolerant species have increased, including black cherry, boxelder, and red maple. This phenomenon is consistent in oak savannas and woodlands across the upper Midwest.

Theresa Vander Woude shared preliminary results from surveys of adjacent Arboretum neighborhoods about urban water issues, specifically why residents adopt certain water-related behaviors and how local organization can best support them. She found that residents valued water, but in order to advocate for policies or actions they felt most comfortable standing behind an expert or having clear factual talking points. There was also concern that residents who were willing to lead on advocating for action were unsure about how to effectively approach their neighbors.

Erin Crone shared results from two experiments. In a controlled mesocosom experiment, she studied interactions between American toads, European earthworms, and Asian jumping worms. She did not find a strong correlation between toad survival and growth in relation to the presence of worms. In a laboratory feeding experiment, toads were far less successful capturing jumping worms compared to European worms.

Emily Snelson, recipient of a UW–Madison Hilldale Undergraduate Fellowship, is studying the interaction between jumping worms, European earthworms, and invasive honeysuckle leaf litter. She presented preliminary data from the mesocosm experiment in a poster. The data suggests that more cocoons were laid in high-litter amounts regardless of litter type, but more was consumed with high amounts of honeysuckle compared to other types and amounts of litter. This work will help us understand if the presence of invasive honeysuckle facilitates the presence of jumping worms.

Two poster presentations on pollinators described projects about bumble bees and monarchs. Jade Kochanski looked at how management activities at prairie restorations affect bumble bees. So far, she has learned that prairie restorations that have had recent seed additions showed an increase in the abundance and number of bumble bees compared to sites that were not recently seeded. Sites that were managed with fire did not show any additional positive or negative effects on bumble bees. Kennedy Laessig investigated whether there was a correlation between populations of adult monarchs, larvae, and eggs with blooming milkweed plants at three prairies around Madison. She found that, at each site, monarch abundance was related to both the diversity of blooming plants and the number of milkweed stems.

Mercedez Kennedy studied the influence of a historic flood event in 2008 on the distribution and abundance of two prairie plants in the Silphium genus, prairie dock and compass plant. Eleven years after the flood event at the Arboretum’s Faville Prairie, the population of these two plants have not recovered to pre-flood conditions.

A big thanks to the students for their hard work and to the audience for their interest and great questions. The annual Arboretum Research Symposium offers an opportunity for students to present Arboretum-based research and share their work with others in the university and Madison community. Please join us next February!