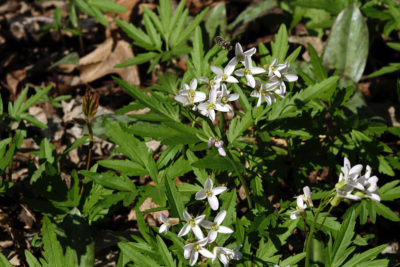 Even during a cool spring like this one (at this writing), May brings a flush of growth – stems, leaves, flowers – especially in the woodland herbaceous layer and on savanna and woodland trees and shrubs. Prairies and savannas that had dormant-season prescribed fire will green up rapidly. Root systems support buds and crowns just under the soil surface that begin growth earlier than those in unburned areas. Garden tasks include trimming last season’s dried material, planting, weeding, and monitoring spring insects, especially queen bumble bees foraging and establishing nests.

Less noticeable than above ground growth – but critically important – are the root systems, rhizomes (underground stems), and other structures hidden from view in the warming soil. Familiar roles of roots include water and mineral uptake, anchoring, and storage (e.g., carrots and beets). But there are many other features and roles of root systems that are important for gardens, restorations, remnant native plant communities, and more.

Root systems vary in shape, size, and depth in the soil. While weeding and transplanting, gardeners find taproots, fibrous roots, and everything in between. Root system features can be influenced by soil type, soil moisture, nutrients, and neighboring plants. As roots grow and die back continuously, they occupy and leave spaces within the soil. This process adds organic matter to the soil and creates channels and spaces for water infiltration. Slowly but effectively, root growth and expansion can make heavy soils more permeable over time. Perennial roots also provide erosion control by holding soils, and they help prevent weed establishment by leaving little space for weed seeds to germinate.

Nature Conservancy ecologist and writer Chris Helzer summarizes prairie root research and addresses myths. Although prairie plants are known for their long and deep root systems, grasses draw water from the top 10 inches of soil, where their roots are most dense. Under drought conditions they can persist with low water conditions or go into dormancy during severe drought yet recover and grow normally the following season. Forbs (non-grass herbaceous plants) draw moisture from the top 30 inches of the soil profile, below the grasses zone, in times of drought. Larger and clonal shrubs in the prairie (sumac, dogwood) draw moisture from 18 inches deep down to 8 feet or more. Deeper water is available to them in times of drought and their deep root structure leads to deeper infiltration under the shrubs.

Roots help some plants establish near a parent plant. Examples include strawberries (Fragaria spp.), where plantlets develop on runners away from the original plant. Small roots develop on the plantlets and anchor into soil nearby. Another example is spiderwort (Tradescantia ohiensis), which may produce small plantlets on arching stems late in the season after blooming. When these plantlets land on suitable soil, they can root. The prickly pear cactus (Opuntia macrantha) can root from nodes anywhere on each pad.

Some plants’ roots have a symbiotic relationship with Rhizobium soil bacteria, which form nodules on the roots and fix atmospheric nitrogen, increasing available nutrients in the soil. The May-blooming legumes wild white indigo (Baptisia alba) or cream indigo (Baptisia bracteata) are examples growing in the native plant garden. Because legumes have long tap roots, large plants are difficult to transplant. If you plant seeds of these species, you may want to inoculate them before planting.

Storage roots, which store carbohydrates underground for some perennial plants, are a source of food for animals who live or dig in the soil. The large roots of plants such as prairie dock (Silphium terebinthinaceum) or compass plant (S. laciniatum) can be damaged by animals, although with multiple new shoots growing from them, the plant may survive despite losing some of the stored energy.

Enjoy your garden in May and appreciate the growth both above- and below-ground!