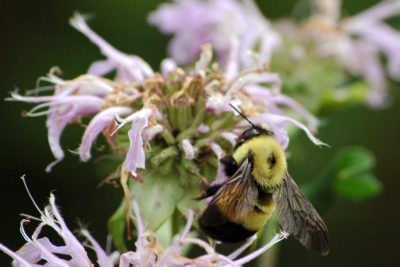 Memory of this year’s late slow spring may dim this month as warmer temperatures and new growth move across the landscape. Garden areas with prescribed fire several weeks ago are now showing new vegetative growth after a cold spell. Our gardening tasks this month include trimming back last season’s growth, planting, weeding, brushing up on seedling identification skills, and monitoring plants and animals in the garden.

With the first growth and blooms of the year, many garden insects become active—hatching, resuming development as larvae or pupae, or coming out of dormancy as adults. Because the Arboretum continues to document bumble bees (including the endangered rusty-patched bumble bee, Bombus affinis) and the Wisconsin Department of Natural Resources is launching a new project to monitor Wisconsin bumble bees, here are some tips for observing bumble bees at this time of year.

Timing: The long-term average date of first bumble bee emergence for our area is April 14. This year, because of the late spring, the first bumble bee new queen sightings occurred 8–10 days later than that. (Most, if not all, of the earliest reports wereBombus bimaculatus, the two-spotted bumble bee, which is usually the earliest to emerge of 12 native bumble bee species at the Arboretum. As of late April, rusty-patched bumble bee queen sightings had not been reported.) Watch for rusty-patched bumble bee queens throughout May as they emerge, establish and provision their nests, and raise the first cohort of workers.

Appearance: Bumble bee queens are relatively large bees. They hatched and mated late last summer/fall and overwintered individually underground in several inches of soil. Rusty-patched bumble bee queens have black pile (hairs) at the head and yellow pile with a black spot on the thorax. The first two abdominal segments are yellow, with no rusty patch. The remaining four abdominal segments are black. For definitive identification, take multiple photos of the abdomen of the bee and top of the head, as there are several species that can be mistaken for each other.

Behavior: After emergence, the new queens have to search for a suitable nest site and find pollen and nectar sources. Nest sites are generally underground (in animal burrows, cracks in rock walls, hollow logs, cracks in foundations, etc.). You often see them flying close to the ground back and forth across an area, sometimes landing to crawl under leaf litter or into a hole. She could be exploring the location or she may have begun to establish her nest. If a queen is carrying pollen into the hole or cavity, she is already provisioning a nest. Because she is the only bee coming and going from the nest at this point, you may not see her often. There are relatively few queens overall (compared to the number of bees seen later in the summer when the colonies are larger). It takes several weeks for the first group of workers to develop and begin foraging. From the end of May into mid-June, you may begin to see the smaller rusty-patched bumble bee workers (all females) with the characteristic rusty patch.

As the season begins, we welcome new and returning native plant garden volunteers and summer student assistant gardeners. Our 2018 public garden tour series is underway. The Friends of the Arboretum plant sale on May 12 offers native plants for every garden. See you there!