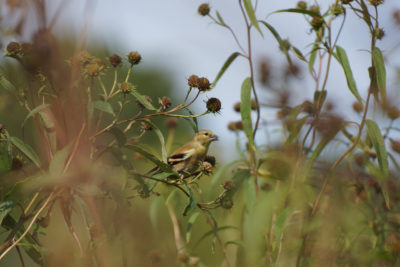 September brings shorter and cooler days, fruit and seed set, senescing leaves, warmer colors in the grasses, migration or early overwintering for some species … the end of summer. Our native plant gardening tasks include seed collecting, weeding, late season planting, making notes for next season, and trimming along garden paths and trails.

Seed collecting is in full swing this month. The large number of species that bloomed in July and early August now have mature fruit and ripening seed. Seed harvest timing and seed quantity available depend on interacting factors, including phenology, pollination success, moisture availability during seed maturation, and the mode of seed dispersal. Ground squirrels and chipmunks feed on larger seeds like American hazelnut (Corylus americana) and eat or cache Silphium sp. seed heads. Goldfinches pull out thistle seed, sparrows make use of grains on grasses, and cedar waxwings devour juniper (Juniperus virginiana) “berries” (actually small sealed cones). To allow for wildlife use, and to perpetuate the plant population on the site, you should limit seed collecting to no more than 40% of the available seed. When it is impossible to know how much seed is present in the stand, be conservative when harvesting. If you want to reduce the reproduction of certain species in the garden, you can harvest seed more completely.

In the Native Plant Garden we find several species of thistle in the genus Cirsium. This includes native and non-native species, with different life histories and habitat preferences. Some thistle species are rare and have a limited distribution geographically or are found only in certain habitats. Some are difficult weeds that thrive in disturbed sites and seed into our gardens.

All of the Cirsium species have similar flower arrangement—tiny individual tube-shaped disc flowers clustered in a head. Each inflorescence is covered by conspicuous bracts in bud stage and during flowering and seed development. Seed dispersal is usually by wind.

Among our native thistles, field thistle (Cirsium discolor) is a large plant with silvery leaf undersides and pale pink flowers. It is a biennial and seeds prolifically. It appears in the Native Plant Garden mostly in sunny spots in the prairie gardens and on the rock walls. Because of its wildlife value—goldfinches use the seed and thistle down during summer nesting—we leave it in larger garden beds. While flowering, it attracts pollinators: bumblebees, long-horned bees, digger bees, leaf-cutting bees, butterflies and even hummingbirds. Because of its large size (3 to 6 feet tall), we often remove it in small spaces or along paths.

Canada thistle (Cirsium arvense) is a non-native perennial, listed as a weed in 37 counties. It is rhizomatous, spreading from a network of horizontal underground stems. Small root pieces less than an inch long have an excellent chance of surviving and producing a new plant. Canada thistle can produce 40,000 seeds per flowering stalk of pale pink heads. To manage this species, treat the site before planting, or in established areas, cut or mow the stalk as it reaches the pink bud stage, just before it blooms. Repeat.

Bull thistle (Cirsium vulgare) is another non-native weed but it has a biennial life history. The first year (or two) is it is a leafy rosette. After that stage, it produces a tall flowering stalk, with winged spiny stem and sharp spiny leaves and flower bracts. The flowers tend to be a more saturated pink/purple color. If you remove this plant before it has time to set seed, it will decrease, as there is no remaining rhizome left underground.

In another autumn change, our summer gardeners Leonie and Karli have returned to college after a busy summer of gardening, monitoring pollinators, and learning. The Native Plant Garden volunteers and I enjoyed working with them this season and appreciated their dedication and curiosity.