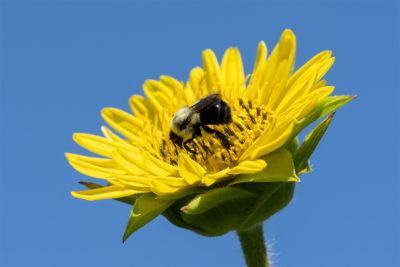 August brings peak summer bloom and the first hints of fall. In the garden, we are weeding, edging, trimming plants along paths and trails, updating plant species lists, harvesting seeds, and monitoring insects such as bumble bees, other pollinators, and dragonflies. We maintain habitat for these organisms and many others. Visitors and our educational programs are making great use of the gardens this summer.

Throughout the first half of the growing season, we heard many comments about how few bees visitors and gardeners were seeing in southern Wisconsin. Here we share what we have seen so far and welcome your observations.

At the Arboretum, frequent bee surveys early in the season showed mainly 3 species (common eastern, two-spotted, and brown-belted)—and many fewer individuals of those than we have seen in the past. While mid-summer is the annual peak of bumble bee colony development, fewer bees are present this year, even on patches of blooming flowers where we have usually observed many.

We may still be seeing the effect of the cold, wet spring: reduced diversity and lower abundance of bumble bee species. Heavy rains through May could have affected or hampered the queens as they tried to establish underground nests. Spring pollen and nectar sources may have been less available, either through delayed blooming or because the queens could not forage during stretches of rainy weather.

Because bumble bees rely on pollen to feed their young, and nectar as a carbohydrate source for the adults, colony development depends on mild temperatures, a steady supply of flowering species of interest to bees, flight distance to available resources, and the number of bees that can be produced. When more workers are produced and survive early in the season, they can support the colony and production of even more workers.

Hot dry weather in late June and early July could have also had a negative effect, as bumble bees are better suited to cool and moderate conditions, and nectar can be more limited under dry conditions. During hot periods, the bees spend little time at each flower and the flowering period shortens as the plants bloom more rapidly. Under sustained dry conditions, plants may be shorter and produce fewer flowers than usual. These are a few of the effects of a changing climate.

In the past two weeks at the Arboretum, we’ve been seeing three additional bumble bee species, in small numbers, during the bee balm (Monarda fistulosa) bloom. We observed the rusty-patched bumble bee in mid-to late-July, several weeks later than usual, and in fewer numbers than usual so far. Will these patterns persist throughout the entire flight season?

To learn more about bee abundance and diversity changes over time, please participate in the Bumble Bee Brigade project. Anyone can join this photography-based monitoring effort, now in its second year, which will reveal patterns in species distributions and timing across the state. Bumble Bee Brigade reports a recent uptick in state bumble bee sightings, including a first record for rusty-patched bumble bee in Jefferson County. Public participation in citizen science and entomology research at UW–Madison (at the Arboretum and elsewhere) will help increase our understanding of these important pollinators.