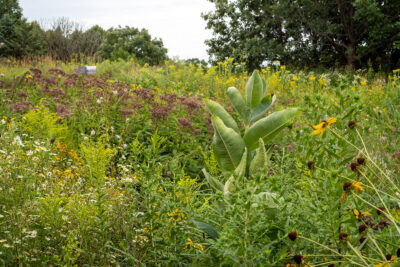 In September, the garden usually experiences cooler high and low daily temperatures and decreasing rainfall compared to the summer months. Plant growth slows and some species enter dormancy. Fall-blooming species are in flower and summer seeds mature and disperse. Insect and bird migrations are underway. Garden tasks include trimming, edging, weeding, seed harvesting, and dead-heading plants that produce many seeds and spread aggressively in all areas.

As I write, Madison has received about 10 inches less than the normal precipitation for this time of year, following a pattern of increasing drought since the “water year” began in October 2020. If this pattern continues, the water year will end September 30 as moderate drought continues.

Despite drought conditions, our native plant gardens do not need supplementary watering. One exception is our new prairie garden, which was planted this summer and is establishing in full sun during a hot and dry period. We have watered the area occasionally and used light mulch on some areas as the plants produce new growth and even flower during their first season. In the already established gardens, early season warmth and occasional rains have provided conditions for vigorous growth and flowering for most species.

Rain gardens generally do not require copious amounts of rain, although obviously they handle those conditions well. Despite the drought this season our rain gardens have thrived, but there are some notable differences from previous years. In the lowest part of our large rain garden basin (30 meters in diameter, containing over 100 species), annual or short-lived native perennial species have grown well even under drier-than-usual conditions. These species do well in disturbed sites, growing from the soil seed bank when conditions permit germination. Examples include Pennsylvania smartweed (Persicaria pensylvanica) with clustered pink flowers, and dotted smartweed (Persicaria punctata) – both members of the buckwheat family. Other “weedy” annual native plants that also germinated this year and have grown to 4–5 feet tall include: lamb’s quarters (Chenopodium album), giant ragweed (Ambrosia trifida), and pigweed (Amaranthus retroflexus). A few individuals of non-native summer annual velvetleaf (Abutilon theophrasti) were present before weeding. Under normal and wetter conditions, this basin is filled with lake sedge (Carex lacustris), tussock sedge (Carex stricta) and blue-joint grass (Calamagrostis canadensis). I will be interested to see how the garden responds when it receives more rain in future years.

To respond to questions about managing rain gardens, I visited several rain gardens in the community – five small (approximately 5 to 8 meters in diameter) planted in full sun, one larger (10  by 25 meters) planted years ago in shade, and one larger one planted in full sun in recent years. The smaller gardens contained 5 to 16 native forb, grass, and sedge species. Animal-dispersed native woody plants like mulberry (Morus alba) and black walnut (Juglans nigra) and non-natives like buckthorn (Rhamnus cathartica) are growing in most of the established gardens. Four of the small gardens had a few non-native weeds like burdock (Arctium minus), Queen Anne’s lace (Daucus carota), or curly dock (Rumex crispus). Hostas were planted in several of the gardens. Each small garden was unique. For example, one had a ring of northern dropseed (Sporobolus heterolepis) with fringed loosestrife (Lysimachia ciliata) in the basin, while another had brown-eyed Susan (Rudbeckia triloba) in the basin. Unlike the others, one of the small rain gardens is clearly being mowed; it was primarily turfgrass with clumps of sedges and two hostas left unmowed. These gardens would benefit from light weeding, which would not take too much time due to the small garden size and limited number of weeds present.

The shade rain garden included spring-blooming woodland plants like bloodroot (Sanguinaria canadense) and wild ginger (Asarum canadense) as well as summer-blooming savanna species and native grasses and sedges. However, it had woody non-natives and a few scattered non-native weeds. This garden would benefit from light weeding and removing the woody plants before they cast more shade in an already shaded area.

In the youngest garden, native plants are still filling in and there are no large weeds, perhaps because it is being cared for by an active and attentive neighborhood group. Caring for a rain garden is not difficult with some simple observations, and the rewards are many – in wet or dry years.