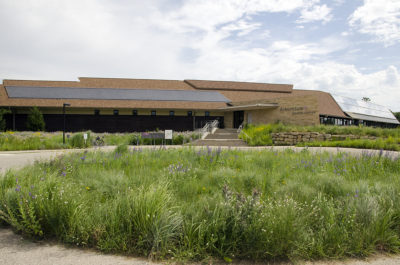 Our 4-acre Wisconsin Native Plant Garden includes a range of gardens inspired by plant communities found in nature, from sand prairie to maple-basswood forest. These areas demonstrate native plants that can grow in shade or sun and in dry or moist soils at your home or property. Many visitors and gardeners ask which plants are suitable for the smaller scale of many home gardens. The circle garden in front of the Visitor Center and our shortgrass transition garden are good examples of low-profile gardens for sunny locations. In addition to grasses, these gardens include colorful seasonal flowering perennials.

Planted 10 years ago, our shortgrass garden (near the CCC monument) has developed with the growth of original plantings, seeding from those plants and others in nearby gardens, and weeding. Cool season June grass (Koeleria macrantha) was abundant in the original planting and initially seeded well in open areas or with soil disturbance, but has declined in recent years. Prairie dropseed (Sporobolus heterolepis) and side-oats grama grass (Bouteloua curtipendula) bloom mid-summer, and little bluestem (Schizachyrium scoparium) flowers as summer ends. These species have persisted in roughly the same amounts over time. The leaves, colors, and varied forms of these grasses provide a background for forbs that bloom throughout the season, beginning with prairie-smoke (Geum triflorum) and shooting-star (Dodecatheon meadia). Slightly taller forbs blooming May through July are spiderwort (Tradescantia ohiensis), flowering spurge (Euphorbia corollata), black-eyed Susan (Rudbeckia hirta) and rough blazing-star (Liatris aspera). In late summer, meadow blazing-star (Liatris ligulistylis) and old-field goldenrod (Solidago nemoralis) come into flower. Delicate harebell (Campanula rotundifolia) has the longest blooming time of any of our native species—from June through October. Its seedling and basal leaves are round, in contrast to the narrow leaves that grow on the stems bearing flowers.

If you are interested in collecting seeds from these species in your garden, note that spiderwort seeds mature and disperse over several weeks, echoing the pattern of its flowers blooming for one day each. Flowering spurge fruits burst open when mature, sending the seeds some distance from the plant. Shooting-star and harebell disperse tiny seeds from capsules that dry and split when mature. Legume seeds are borne in tiny pods, which drop near the plants. Wind-dispersed seeds of the other species can travel over greater distance.

Planted 17 years ago, our circle garden is slightly taller, with some of the same grass species and a few more forbs adapted to sunny, well-drained areas. Lead-plant (Amorpha canescens) has persisted and silky aster (Symphyotrichum sericeum) has declined. Bright yellow prairie coreopsis (Coreopsis palmata) has persisted, spreading by rhizome as well as seeding into bare areas. White prairie-clover (Dalea candida), a legume, draws pollinators during its mid-summer bloom and spreads only by seed. Heath aster (Symphyotrichum ericoides) has increased in this garden and spread to other areas nearby. Common milkweed (Asclepias syriaca), showy goldenrod (Solidago speciosa), biennial gaura (Gaura biennis) and field thistle (Cirsium discolor) have seeded in and successfully established in this garden, yet they do not seem to shade the shorter plants out.

A short stature garden requires monitoring and weeding, as sunlight may reach the soil surface, allowing weed seeds to germinate and grow. We have seen a decrease in quack grass and dandelion in response to weeding, but common bindweed is a constant challenge in these two gardens.

Try a short stature planting in a sunny dry or dry mesic spot in your garden or landscape.