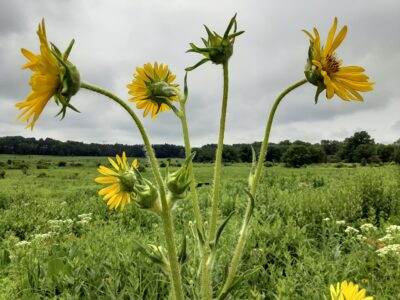 July is the peak of summer, reaching the highest average temperatures of the year toward the end of the month. Plants in the prairie, savanna, and wetland gardens reach full size, and many species come into bloom throughout the month. Garden tasks include weeding, edging, trimming, collecting seeds from early blooming species, and monitoring.

Four species of Silphium grow in full sun in our prairie gardens and are of special interest in July. The first to bloom (this year, flowering began in June) is compass-plant, Silphium laciniatum. It is a perennial with large basal leaves that are deeply lobed and held vertically. These adaptations reduce heat load to the leaves, which are also thick and leathery. Each flowering stalk is robust, up to six feet tall, covered in hairs, and bears several flower heads on small branches. The flower heads have a typical sunflower form—ray flowers (which look like petals) and disk flowers at the center. The ray flowers are the fertile flowers for this genus, so they will produce the seeds. So far this season, we have observed leafcutter bees, bumble bees, small halictid bees, flies, and honey bees visiting the flowers. This plant reproduces and spreads by seed, but each plant can increase in number of basal leaves and stems.

With a similar plant form, prairie dock (Silphium terebinthinaceum) has huge entire (unlobed), heart-shaped leaves, standing vertically in clusters. It blooms later than compass-plant, sending up a slender, smooth stalk with round buds on longer branches when in full bloom. The flower head structure is similar to compass-plant’s, although the heads are smaller. Mature fruits are flat and can be dispersed over short distances by wind. Reproduction is mainly by seed and from plants growing slowly out from the original one.

In contrast, the other two Silphium species bear leaves in opposite arrangement all along the stem. Rosinweed (Silphium integrifolium) grows up to five feet tall and bears its flowers at the top of the plant and on side branches. It has stiff stems and thick rough leaves. It forms small clusters of stems as the plants mature, and spreads by seed. On many of our Native Plant Garden rosinweeds, there is evidence of insect damage on the leaves that were emerging about a month ago. At that time, caterpillars of the rare silphium moth (Tabenna silphiella) were feeding, but after the moth’s larval stage the plants are back to normal stem and leaf growth and will bloom soon.

The most aggressive of the Silphiums is cup-plant (Silphium perfoliatum) which has opposite leaves and can grow to 10 feet tall. The leaf blades are fused around the substantial square stem, forming cups that hold rainwater. This plant has a strong taproot but also shallow underground stems that form extensive colonies. It bears flowers on unbranched stems and can also spread by seed. We did not plant cup-plant in the Native Plant Garden, but one came up in the dry mesic prairie garden in dry rocky soil. Each year it remains relatively small and we remove flower heads before they disperse—living in a suboptimal spot, it has remained in check. Both rosinweed and cup-plant have value for pollinators, other insects, and birds.

Silphiums are long-lived perennials that will bloom after two to three years of growth (if planted from seed). They are easy to grow, tolerant of drought, and can grow in rocky or gravel soils, although cup plant thrives in rich wetter sites. Because of the large storage roots and extensive root systems of these plants, I recommend starting them from seed or small plants rather than trying to divide them. Beware of cup-plant if you have a small to medium garden, it spreads and seeds vigorously and may overtop your other plantings. It is more appropriate to consider for a wetland or shoreline large-scale planting.

In the “prairie birthday” selection in A Sand County Almanac, Aldo Leopold wrote, “heretofore unreachable by scythe or mower, this yard-square relic of original Wisconsin gives birth, each July, to a man-high stalk of compass-plant spangled with saucer-sized yellow blooms resembling sunflowers. It is the sole remnant of this plant along this highway, and perhaps the sole remnant in the western half of our county. What a thousand acres of Silphiums looked like when they tickled the bellies of the buffalo is a question never again to be answered, and perhaps not even asked.”

While bison do not roam in our gardens or most prairie restorations, why not have acres of Silphiums, along with many other plants of prairie communities, under our collective care and stewardship?