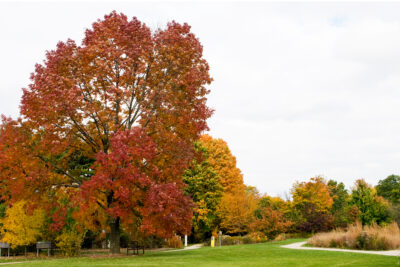 In March our land care staff removed a large ‘Autumn Purple’ white ash (Fraxinus americana) from the Native Plant Garden. Acquired by the Arboretum in 1955, as a graft of material from a male tree located near the School of Human Ecology Building on campus, our tree was planted on June 2, 1961. At planting time, the tree was 7 feet tall. The planting location was “in turnaround at the gate,” describing the road configuration at the time. The planting record notes that it was a “Replacement for Marshall’s seedless ash which was destroyed by vandals.”

The pattern of growth rings indicates that it established well and grew rapidly. In 1977, the McKay Center (original visitor center building) opened with its north entrance facing the tree and a gravel parking lot nearby. By 2001, construction on the current western wing of the Visitor Center was complete, the Native Plant Garden was laid out, and the road was relocated south of the Visitor Center.

In recent years, the tree was infested with emerald ash borer (EAB), and falling branches became a safety concern. As is true for most ash trees in the Arboretum, we did not treat it with systemic insecticides. Rather, we remove hazard trees. While it is sad to lose such a significant and beautiful tree, our Wisconsin Native Plant Garden designer, Darrel Morrison, has laid out a new garden bed in the newly opened area.

A few garden insect changes to watch for in May include the arrival of monarch butterflies (Danaus plexippus) as the milkweed emerges. Track this migration through the Journey North project based at the Arboretum. Some butterflies active in early spring, like mourning cloak (Nymphalis antiopa), lay eggs on a range of host trees. Cabbage white butterflies (Pieris rapae) feed on members of the mustard family, which include early cool-season species. Migrating birds return from wintering grounds and use the flush of insects hatching and developing on new leaves as a key food resource during nesting season. Insect damage to these trees is mostly insignificant. Most second-year plants of stickseed (Hackelia viriginiana) are already dotted with insect holes created by flea beetles (Longitarsus melanurus). This does not seem to diminish the number of prickly fruits produced by stickseed later in the season.

Doug Tallamy’s new book, The Nature of Oaks, describes the amazing diversity of larvae that use oak as a host plant. It is a great testament to the impact you can make by planting a small oak, or an acorn.

Enjoy the changes in your garden this month, as spring rushes in.