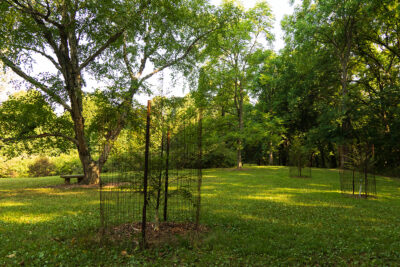 After a two-month hiatus due to the COVID-19 pandemic, garden staff returned to work in mid-May amid a record number of visitors enjoying the garden’s spring bloom display. Despite the crowds, the gardens felt a little lonely without the comradery of co-workers and volunteers (who were still home-bound) to share the seasonal beauty and work.

With no volunteer help (which averages more than a thousand hours a year) or student help, garden staff have been pressed to keep the gardens looking presentable. Tasks such as weeding and pruning have been the primary focus. While it has been challenging, garden staff have made great progress with maintenance and have also added an additional fifty-two specimens to the collection. I’ll highlight three of the notable species.

We added three specimens of the Virginia round-leaf birch (Betula uber)—one of North America’s rarest trees. First described in 1918, it was lost until 1975 when forty-one trees were discovered growing along a stream bed in Smyth County, Virginia. These trees constituted the entire population of the species. By 1977 the number had dwindled to just twenty-six trees, leading to the birch’s designation as an endangered species in 1978. It is closely related to Wisconsin’s native yellow birch, and when bruised it emits the same wintergreen-like aroma.

The trees in the Longenecker collection were propagated by the USDA from material collected from the original Smyth County population, which by 2003 was only eight trees. Fortunately, twenty new populations have been established along the same Smyth County watershed, and the species designation has been changed from endangered to threatened. If you’d like to see the trees, they are located in the southeast corner of the gardens along the edge of Gallistel Woods.

We also added to the collection a cultivar of the Caddo sugar maple named “Powder Keg” for its dynamic fall color. Caddo sugar maples are ecotypes of the sugar maple (Acer saccharum, Wisconsin’s state tree) that are found only in the canyons of Caddo County, Oklahoma. They are more drought and heat tolerant, better adapted to high pH soils, and more resistant to leaf scorch and tatter than other sugar maples, making them great candidates for use as street trees.

Another tree native to the southwestern U.S. that was added to the collection is the little walnut (Juglans microcarpa), sometimes referred to as the Texas walnut. Native to southwestern Kansas, western Oklahoma, Texas, New Mexico, Arizona, and northern Mexico, it is most commonly found on rocky ravines or along narrow riparian forests alongside a river or creek bottom. Considered a small to medium size tree, it grows to between 20 and 30 feet at maturity, compared to 75 to 100 feet for the eastern American black walnut (Juglans nigra). As the name “little walnut” indicates, it produces the smallest fruit—less than an inch in diameter—of all walnut trees. The three little walnut additions were propagated from nuts collected in south central Kansas (Comanche County), and they represent genetics from the species’ extreme northern range. We transplanted the trees from the Arboretum’s nursery, where they had survived, unscathed, temperatures of -29°F during the winter of 2018–19.