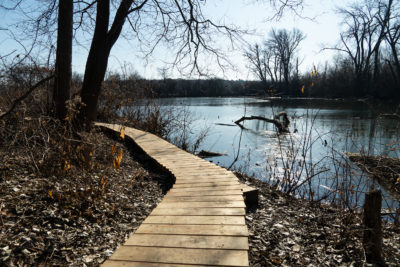 The Ho-Nee-Um Pond boardwalk has reopened after completion of a project to replace 400 feet of deteriorating boardwalk. The wooden plank path in the Wingra Oak Savanna area just off Monroe Street is popular among birders, tour groups, and residents of the surrounding neighborhood.

The redesigned boardwalk was built with decking laid perpendicular to the trail to provide better traction, and higher ground clearance should reduce closures from flooding. In November, the new boardwalk was tested against flooding when a beaver dam backed up water in the area. The higher ground clearance kept the boardwalk above water, and the improved mud sill foundation remained stable.

During reconstruction, changes were also made to the layout. A 200-foot section of loop that had run parallel to the bike path was permanently closed. Beaver activity in the area has changed the soil hydrology, and after removing the old boardwalk it became evident that the heavily saturated ground would require a boardwalk with either piles or a pier foundation rather than the planned mudsill foundation. These types of boardwalks are costly and the decision was made to not replace this section.

This project would not have been possible without the help of many people and groups. I would like to thank the following parties for their support and assistance: