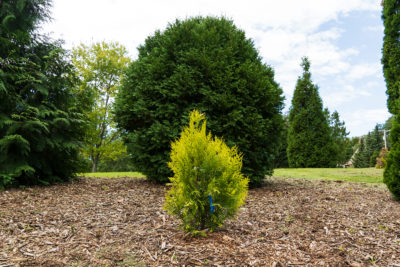 Winter damage: The severe cold during winter 2018–19 (-29° F on January 31), coupled with extreme temperature fluctuations, resulted in significant damage throughout the Gardens. More than 50 specimens were killed back to the snowline. Most of these were shrubs, and nearly all recovered during the growing season and flushed with new growth. Unfortunately, another 27 specimens were killed outright. While this is disheartening, part of the Gardens’ mission is to trial new plants and study their suitability in southern Wisconsin’s climate. One relevant factor has always been cold hardiness, and as our climate changes, documenting plant reactions to it becomes ever more important.

New specimens: Thirty-five new specimens, comprising 25 different taxa, were added to the Gardens this year. One specimen is a cultivar of the giant western arborvitae (Thuja plicata) named ‘Fluffy.’ This is a unique pyramidal evergreen with soft, bold foliage that emerges yellow in the spring. While native to the western United States, this arborvitae species does quite well in southern Wisconsin, but it does not attain the large size it is known for out west. Unlike Wisconsin’s native eastern arborvitae (Thuja occidentalis)—a favorite winter food source for white-tailed deer—the western species is generally considered to be deer resistant, especially as the tree ages. This is due to high foliar levels of terpenoids, particularly the monoterpenoid α-thujone, which deer find unpalatable.

Arborvitae have long been used by Indigenous North Americans for medicinal and other purposes. The common name used today was bestowed by French explorer Jacques Cartier. During his second trip to Canada in 1535–36, his crew of 112 men came down with scurvy, and 25 died. Desperate for help, Cartier appealed to the local Iroquois tribe for help. They offered a tea made from leaves and bark. The tea, high in vitamin C, led to the crew’s seemingly miraculous recovery within days. Astounded by the curative power of the tree, Cartier called it “arborvitae,” Latin for “tree of life,” in his journal.

Plant society tours: During the spring, Gardens curator David Stevens hosted tours for two plant society annual meetings. On May 6, more than 40 members of the Magnolia Society International toured the collection of nearly 80 magnolia specimens, many in full bloom. On June 13, 55 members of the Herb Society of America enjoyed a beautiful spring day learning about some of the Gardens’ diverse plantings. One notable visitor was Holly Shimizu, former longtime executive director of the United States Botanic Garden in Washington, D.C.

Student help: The land care staff had three student helpers over the summer who split their time between the natural areas and Longenecker Horticultural Gardens. Chloe Baumbach, a Madison native, is a sophomore at UW–Madison majoring in environmental science with a minor in gender and women’s studies. Theresa Oberhauser (no relation to director Karen Oberhauser) hails from Mineral Point and is a senior at UW–Madison majoring in zoology. Matt Morse, from Egan, Minnesota, is a junior at UW–Madison majoring in electrical engineering. The students were involved in maintaining the Gardens—in particular, they kept the shrub display area looking its best. Their help was especially important as the Gardens were short-staffed this growing season after the horticultural technician left in early May to attend graduate school. We welcome a new horticultural technician, Zane Fuller, who joined the staff in late September.