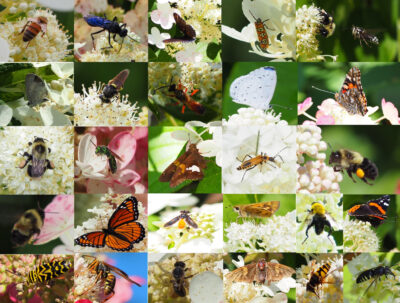 Collage of some of the insects photographed in 2019

This year marks the third summer of data collection for the Panicle Hydrangea Pollinator Monitoring Project in Longenecker Horticultural Gardens. The project, conceived and started by garden curator David Stevens and UW–Madison Horticulture student Gustavo Meneses, began in 2019 with the goal of identifying and cataloging the varied insect pollinators that David had previously observed using Hydrangea paniculata flowers during its extended bloom time. The gardens currently contain over 70 panicle hydrangeas made up of 44 different cultivars. The collections started expanding rapidly in 2001 after a chance encounter between former curator Ed Hasselkus and Dutch nurseryman Wim Rutten during an American Conifer Society trip to the Netherlands. Wim would go on to share 10 new Dutch cultivars with Ed, and additional cultivars have been added almost yearly ever since.

The project employs high-definition photographs to capture insects that are using the flowers during the summer and fall while the hydrangeas are in bloom. Insects are then identified over the winter months, when the weather is more conducive to indoor work, by the garden’s horticultural specialist Zane Fuller. During the summers of 2019 and 2020, Gustavo handled the photo data collection in the field as part of an independent study through the horticulture department.  This summer, Gustavo interned at Olbrich Botanical Gardens and Zane took over the photography.

In 2019, 35 pollinator taxa were identified, most to species level. That number increased to over 45 in 2020, with more expected to come as additional identification is completed for the data captured at the end of the 2020 season and all of 2021. Pollinators identified includes bees, wasps, ants, flies, beetles, butterflies and moths, and even ruby-throated hummingbirds. Of particular note is the rusty-patched bumblebee, which has been observed multiple times every summer so far. We have also observed insects using water captured on the inflorescences as well as various predatory insects and spiders hunting and feeding on the pollinator insects. Dragonflies are commonly seen atop flower clusters on the tallest plants where they can observe potential prey.

In 1953, G. William Longenecker selected a wild plum (Prunus americana) for the size of its fruit. Arboretum records note that the plum was found growing along the edge of “the arboretum prairie,” in an area we think is unplowed remnant (original, rather than restored) prairie. It stood out from other wild plums as the fruit are two to three times larger than typical wild plums and the flavor was superior.

This plum never entered the nursery trade but recently it has found a new purpose. Over 200 seeds from this year’s crop of plums were collected as part of a collaboration with the College of the Menominee Nation on a project called “Building a Northern Fruit Consortium.” The project aims to increase the amount of traditional fruit grown and eaten by Indigenous communities throughout the Great Lakes and Northern Plains states including the Menominee, Oneida, Mohican, Anishinabe, and Dakota Nations. In general, wild plums are not very productive, and virtually all the hundreds of historic varieties once in the commercial trade have been lost. Plants generated from the arboretum seeds will be used in a breeding program to develop superior genotypes to boost the appeal and productivity of future orchards and backyard plantings in Indigenous communities.