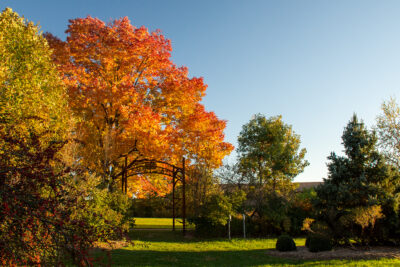 Goodbye to a Special Tree

On March 1 we said goodbye to a special tree, a native white ash (Fraxinus americana) cultivar named ‘Autumn Purple’ that stood just north of the Visitor Center in a lawn area of the Native Plant Garden.

In 1926, shortly after he arrived on campus, G. William Longenecker, the Longenecker Horticultural Gardens (LHG) namesake and first curator, noticed a tree growing in front of the old Home Economics building. The tree drew his eye one autumn due to its unusual fall color. Instead of the yellow typical of the species, it displayed a spectacular and long-lasting reddish-purple, coupled with a lovely, rounded form. It was also seedless (male). In 1955 he grafted the tree and named it for its fall color. On June 2, 1961, the grafted tree was planted to the Arboretum site where it would grow for nearly 60 years. The cultivar went on to become wildly popular and was available through nurseries before the arrival of emerald ash borer (EAB).

Ultimately, an EAB infestation led to its rapid decline and necessitated removal. During the tree’s life, its surroundings saw many changes, from Visitor Center construction in 1977 to installation of the Native Plant Garden around the building in 2002. Following Professor Longenecker’s passing in 1969, another tree was planted in the Longenecker Gardens collection under which some of his ashes were spread. That tree was treated for EAB starting in 2015 and is still going strong.

Following in the footsteps of ‘Autumn Purple,’ two other trees from the Longenecker Horticultural Gardens collection will be introduced into the nursery trade. Working with the Morton Arboretum and the Chicagoland Grows plant introduction program, we took propagules from the majestic black tupelo (Nyssa sylvatica) in front of the Visitor Center and from the Troemner spruce (Picea x ‘Troemner’) in the pinetum.

The black tupelo, given the cultivar name ‘Carolyn’ by plantsman Roy Klemm in honor of former curator Ed Hasselkus’s oldest granddaughter, is admired for outstanding and long-lasting red-maroon fall color and for superior cold hardiness. The tree was originally purchased in 1956 as a seedling from Isaac Langley Williams, a plant collector from Exeter, New Hampshire. It spent five years in the Arboretum’s nursery before being moved to its current location on October 3, 1961.

The Troemner spruce is a unique hybrid made by Allan Troemner, a UW–Madison Department of Forestry technician in the 1960s and 1970s who ran a small nursery on the side. The hybrid is a result of a cross between a Serbian spruce (Picea omorika) and the Colorado blue spruce (Picea pungens) cultivar ‘Koster.’ Allan donated two of these hybrid plants to the Arboretum in 1967, and in 2015 we had it officially registered as the ‘Troemner’ Spruce in Allan’s honor.

The unique hybrid displays the pyramidal form and graceful ascending branching habit of the Serbian parent, complimented by glaucous blue shoot tips characteristic of the Colorado blue spruce parent. Like the Serbian spruce parent, it tolerates hot humid climates and air pollution better than most spruce species and appears to be free of the fungal issues that plague blue spruce in our region. If all goes according to plan and the trees perform well in production, future royalties from sales will be returned to the Arboretum to help support LHG upkeep.