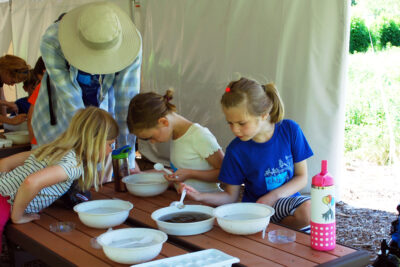 Earth Focus Day Camp sessions are exploring animal hideaways, water, soil, habitat, and climate. During the Wild about Water session, we studied aquatic macroinvertebrates – animals without a backbone that spend at least part of their life cycle in water. We also looked for evidence of water in different areas, talked about watersheds, and learned about other kinds of animals that live in wetland habitats.

One of the animals we learned about was cranes, and on “crane day” we had a guest visitor: Stephanie Schmidt, from the International Crane Foundation, who talked with us about sandhill cranes and whooping cranes. We also learned about how wetlands work, how cranes are well adapted to living in them, and why they are important to us and other animals.

Stephanie was also happy to share some crane knowledge with our readers! We hope you enjoy learning more about cranes in the rest of this article contributed by our International Crane Foundation guest.

When sandhill cranes are around three to five years old, they find a single partner to mate with, usually for life. They nest near large wetlands or in small, isolated wetlands, like those at the UW–Madison Arboretum. Their nest is a large mound constructed of dried grass, with a small depression in the center where they lay one or two baseball-sized brown-speckled eggs. The pair takes turns sitting on the eggs for around 30 days until the chicks, called colts, hatch. Most frequently, a sandhill crane pair raises one chick, and the second egg serves as an insurance policy should the first egg not hatch. But sometimes they raise two colts, called twins. Each year, roughly 1,000 colts hatch in Wisconsin!

Sandhills have one of the highest populations for crane species, and nearly 20,000 visit Wisconsin each year. Unfortunately, they were not always so numerous. In fact, in the 1940s there were only around 25 breeding pairs left in Wisconsin and none in many Midwestern states. In “Marshland Elegy,” originally published in 1937, Aldo Leopold wrote, “The sadness discernible in some marshes arises, perhaps, from their once having harbored cranes. Now they stand humbled, adrift in history.” At the time, Wisconsin’s sandhill cranes were threatened by habitat loss and unregulated hunting, and Aldo Leopold believed they could be lost forever.

Today, sandhill cranes are now regarded as a Wisconsin conservation success story, largely due to federal protection laws, state and local habitat restoration and protection programs, landowner and community support for such programs, and the cranes’ adaptability to human landscapes like farm fields and city parks.

Whooping cranes, a close relative of sandhill cranes, also experienced a similar decline in the 1940s. Whooping crane populations have slowly grown thanks to reintroductions, habitat protections, and legal protections, but they have not experienced the same robust growth as sandhill cranes, partly because they strongly prefer wetlands, a habitat which still faces threats around the United States. Around 80 whooping cranes spend the summer near Necedah and Horicon National Wildlife Refuges every year.

Urban expansion, wetland conversion, poaching, high voltage transmission lines, and other threats to crane populations continue to exist. There are many ways you can protect cranes in your community. Visit savingcranes.org to learn more.