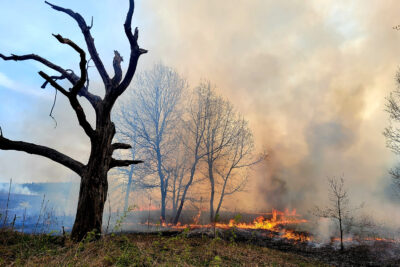 The spring prescribed fire season is always an exciting time of year, but the Arboretum fire crew looked forward to this year’s season with extra anticipation. In 2020, we completed one burn – on March 17, one day before the University sent all non-essential staff home as the COVID-19 pandemic set in. That fire was at Bolz Prairie, an outlying property north of Middleton. The main Arboretum had zero fires last spring.

Fire is our most efficient management tool for reducing invasive species and enhancing the growth, flowering, and seed production of native plants. Spring usually provides the best conditions and timeframe for burning. Missing the 2020 season left us with a lot of catching up to do, so we were eager to get fire on the ground in as many units as possible. In the end, it was one of our most successful burn seasons in a long time.

Our first burn was March 30. That’s pretty late for us (we usually start mid-March). Luckily, the spring turned out to be quite dry and we had a record number of burn days (16). That was possible because we were able to burn on days when the Wisconsin Department of Natural Resources fire danger rating was above moderate. Until a few years ago, the City of Madison Fire Department did not permit burning when the rating was above moderate, which really restricted how often we could burn. In May 2018 an agreement was reached with the City to allow professional crews that met certain training standards to burn on days with a rating above moderate.

This spring we burned on one day that was rated low (on May 11 after spring green-up), and one day that was rated moderate. The remaining 14 burn days were either rated high (8) or very high (6). Having the flexibility to carefully burn on those types of days was crucial to the success of our burn season – and was important in demonstrating that professionals can carry out safe burns on days when the general public is asked not to burn. You can learn more about fire danger ratings and professional safety protocols on our Why We Burn page.

In addition, we often burned two and sometimes three units (or partial units) in a day, which contributed to a record number of burn events for a single season (25). Six of those fires had research objectives.

In all, we burned 160 acres this spring, which is the most in my nine years leading the Arboretum fire program. That included approximately 57.5 acres at the Grady Tract, 47.5 at outlying properties, 40.5 at Curtis Prairie, and 14.5 at other Arboretum units. It’s not the most acres ever burned in a season, but there are a number of differences in how we burn now compared to how burning was done in earlier times.

One important difference is that we leave more of the prairies unburned to serve as protective refugia for critters like insects, turtles, snakes, etc. We’re also interested in supporting a mix of habitat types to benefit as many species as possible, and having burned and unburned areas help us accomplish that goal. We may now only burn half of a prairie when previously it was burned in its entirety. Therefore, it takes longer for our burned acres to accumulate over the course of a season compared to earlier years.

We are also burning a lot more oak savanna and woodland units compared to earlier years, when the focus was primarily on prairie, and those units tend to be smaller and thus add more slowly to the total number of acres burned. And while the units are smaller, they also have a range of fuel types, from grasses to shrubs to trees and snags, so they require a lot more time and effort to ignite and then adequately mop-up, which leads to longer, harder days on the fireline for the crew. And of course, being in the middle of Madison means we have to be extra careful with managing smoke, and one way to mitigate the negative effects of the smoke is to burn smaller units.

The 2021 spring fire season also brought the return of the UW fire ecology class (Landscape Architecture 375, Prescribed Fire Ecology and Implementation) for training exercises after a year off due to the pandemic. Over five Tuesday afternoons in March and April, fourteen students completed the physical fitness test and field training session for wildland firefighting certification, as well as training exercises with live fire. The exercises focused on creating firebreaks, suppressing spot fires, and burning small units. Delivering the course is a big collaboration. Partners included lead instructor Jeb Barzen and volunteers from his Private Lands Conservation LLC, The Nature Conservancy, Lakeshore Nature Preserve, the Wisconsin Prescribed Fire Council, and many others who gave students opportunities to participate on their crews during the spring fire season.

Overall, it was a tremendously successful return to fire for the Arboretum after the lost year. The weather cooperated, giving us many opportunities. The burn unit preparation we did in fall 2020 also helped us take advantage of those opportunities. And our experienced, enthusiastic, dedicated burn crew is the driving force behind it all. The core crew includes our four natural resource specialists, Chris Kregel, Lance Rudy, Tom Bresnahan, and Chelsea Camp. They were involved with all 25 burns, leading lines and lighting miles of fire. Arboretum horticultural specialist Zane Fuller (23 burns), curator David Stevens (15 burns), ranger Stephanie Petersen (13 burns), and custodian Chad MacWilliams (6 burns) helped round out the crews so we had enough people to conduct safe burns. We also had numerous assists from Arboretum research specialist Christy Lowney, Adam Gundlach (Lakeshore Nature Preserve), and Jessica Ross (UW Department of Soil Science). Thank you all. It was the most fun I’ve had during a fire season in a long time!