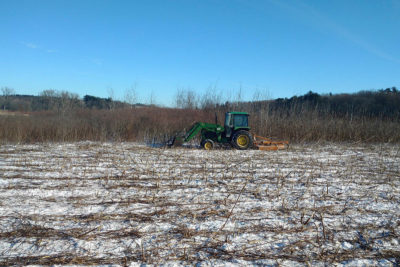 In fall 2014, I wrote an article about the challenge of woody species such as smooth sumac (Rhus glabra) and gray dogwood (Cornus racemosa) invading Curtis Prairie, our showcase restoration, also considered to be the first restored prairie in the world. I’d like to provide an update, as we’ve done a lot of work to alleviate the invasion of woody species in the prairie since that article was written.

An especially cold November in 2014 created conditions for the land care crew to begin large-scale brush management on Curtis Prairie in December. The frozen ground and light snow cover allowed us to get our tractor and 6¢ heavy-duty rotary mower into the prairie without causing soil disturbance. We mowed three acres of dense, widespread smooth sumac and grey dogwood throughout west Curtis, and when the snow melted a couple weeks later we followed up with herbicide application to the stumps. During the 2015 growing season, only a few scattered sumac and dogwood stems remained, most of which we promptly dealt with, and west Curtis as a whole responded with a species-rich flush of prairie grasses and forbs.

We mowed more sumac and dogwood on Curtis Prairie with our walk-behind brush mower the following winter, in January and February of 2016. Our focus that winter was central Curtis, but we also worked in a small section in the remnant portion of east Curtis. Overall, we mowed 8 acres of invasive brush that winter and followed up with herbicide application to stumps and resprouting stems that spring and summer. As in west Curtis the year before, we were rewarded with a species-rich flush of prairie grasses and forbs.

In December 2016 we continued our large-scale brush management efforts in central and east Curtis. The cold temperatures and snow cover again provided good conditions for limiting soil disturbance, so we took our tractor mower onto the prairie. (And we did not get stuck! There was more snow this December than in 2014, and our tractor is not four-wheel drive.) So far we have mowed 8 ½ acres this winter, with a little more we hope to finish up in January or February.

While we have mowed a lot of sumac and dogwood (and other species such aspen, willow, and honeysuckle) on Curtis over the last few years, it is important to note we are not attempting to eradicate all woody vegetation. Some species we do want to remove entirely, such as honeysuckle and buckthorn, but for other species our goal is to reduce abundance and give prairie and oak savanna species more light and space. For example, we’ve intentionally left patches of willow in low-lying wet areas because we know American woodcock and other birds utilize them. The crew has uncovered and carefully mowed around numerous wafer-ash shrubs, a species of special concern in Wisconsin. And the crew has also uncovered and carefully mowed around numerous young bur oaks, protecting the next generation of savanna trees for the Arboretum.

In mid-May 2016, we had two rewarding sightings that suggest our management efforts might be paying dividends. First, early one morning after an evening of heavy fog, we saw bobolinks on Curtis Prairie for the first time in anyone’s memory. They were likely using Curtis as a resting stop after the fog drove them from the sky during migration. They didn’t stick around, and as nice as it would have been to have them stay, it was still great to see them on the prairie, if only briefly.

A few days later we were planning to burn west Curtis. During our pre-burn scouting of firebreaks on adjacent units, we found a Blanding’s turtle on the south end of east Curtis. As far as anyone knew, it was the first record of a Blanding’s on Curtis Prairie. Although it was taken off the DNR’s threatened species list in 2014, it remains a fully protected species of special concern in Wisconsin and is one we consider to be of very high conservation value. We cancelled our burn in case other Blanding’s turtles may have wandered into our west Curtis burn unit. Although we didn’t accomplish a much-needed fire, and that is always disappointing, we felt it was a successful day from a conservation and restoration standpoint. In the future we’ll adjust our approach to fire and plan to burn Curtis Prairie only in the early spring so we’re finished before the turtles become active.

My December 2014 article touched on the challenge of balancing ecosystem change with land management in a way that meets our conservation goals. The process is never fixed. We have multiple goals and use a range of strategies to achieve them as we face changes in both urban and natural conditions. Even after we devise a plan, sometimes we need to shift priorities and adapt strategies as we go, based on unanticipated factors. I believe the west Curtis burn / Blanding’s turtle example illustrates that challenge very well, not only for Curtis Prairie but all the sites we manage. It demonstrates our ability to meet the challenges creatively and successfully by having a vision yet watching for new developments and being flexible and opportunistic as they arise.