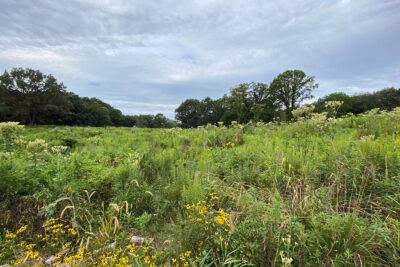 It has been a year unlike any other for the Arboretum restoration crew, as it has for so many people. It started with the crew being sent home for almost two months from mid-March to mid-May as part of the University’s initial response to slow the spread of COVID-19. We were able to fit in a prescribed fire at Bolz Prairie on our last day but had to forego more than twenty other burns we had planned for the spring. Returning to work in mid-May put us several weeks behind on our invasive species removal, and we have had to catch up without the assistance we normally receive from an AmeriCorps team, Arboretum volunteers, and summer student workers. We never fully caught up on some of those early-season species like garlic mustard and dame’s rocket, but we have stayed on top of the species that followed and, in some cases, have been able to do more than in previous years by improving some of our methods.

As in previous years, a primary focus of our work this summer has been in the savanna restoration project area at the Grady Tract south of the Beltline. Work has included the usual tasks of treating invasive species such as honeysuckle, buckthorn, Oriental bittersweet, reed canary grass, and Canada thistle with herbicide, as well as hand-pulling species such as sweet clover, Japanese hedge parsley, wild parsnip, and Queen Anne’s lace. This year we tried a new method and used the skid steer to mow down raspberry and blackberry (Rubus) canes, as they had grown very tall and dense in some areas, the tangle of thorns making areas inaccessible. Since we were unable to conduct prescribed fires in the spring, the Rubus plants had the opportunity to grow bigger than normal. The improved access allowed us much easier access to do our regular herbicide and hand-pulling work, and we greatly reduced a nuisance-species at the same time. With the ongoing work to combat invasive species, combined with increasingly abundant native plants due to seeding and natural re-establishment, the project area looks better than ever.

We were really excited the first time we saw adult red-headed woodpeckers using the site in May 2017 (eBird has record of a sighting in 2016 and one in 2012). In the following years we would see them occasionally throughout May and felt optimistic they were nesting somewhere. But we never found evidence of a nest and didn’t see the woodpeckers in other months. Nonetheless, we were happy they were using the site, if only transitionally, thinking individual birds were looking for a mate and would eventually nest there. Then, finally, this summer we started seeing juveniles! We still didn’t see evidence of a nest, but at least sightings of juveniles indicate successful nesting nearby and use of our site as the young ones develop (but I like to think they are nesting here, somewhere).

We’ve seen juveniles over the last few weeks near Curtis Prairie, too. Could they be the same individuals seen at Grady, or is there a distinct set of birds responding to the restoration work we’ve been doing around Curtis Prairie, Teal Pond Wetlands, and Juniper Knoll the last several years? Either way, their presence highlights an exciting restoration success story for the Grady project, and the Arboretum in general.