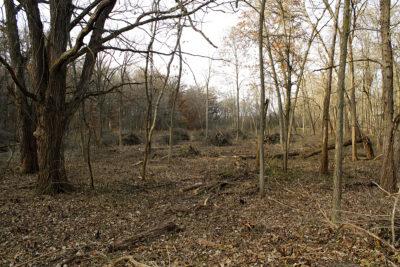 In the eastern part of Wingra Woods, along the western edge of Arboretum Drive, a brush-clearing project is underway in a little-known management unit called Skunk Cabbage Wetlands (SCW). Just over an acre in size, SCW lies in a narrow band along Marshland Creek, which drains Teal Pond into Lake Wingra. The wetland is home to numerous interesting plants, including button bush, marsh marigold, and, of course, skunk cabbage. Between SCW and Arboretum Drive, approximately four acres of oak woodland slope down from the road to the wetlands. Although visible from Skunk Cabbage Bridge and the viewing platform on the K4–K5 trail segment, SCW was mostly hidden from roadside view by thick growth of buckthorn and honeysuckle, and thus has gone largely unnoticed by Arboretum visitors.

The idea for clearing the buckthorn and honeysuckle is nearly a decade old. Around 2007 or 2008, while searching for garlic mustard and dame’s rocket in the strip of Wingra Woods between SCW and Arboretum Drive, we noticed a still fairly rich understory of spring ephemerals growing amid the invasive shrubs. There was also a notable stand of large oak trees, some of which may date back to the oak savanna that originally inhabited the site. While the area was somewhat degraded, we saw that it had great restoration potential. Furthermore, Wingra Woods west of SCW was mostly free from buckthorn and honeysuckle, so being able to connect to that area of open oak woodland added to the restoration potential.

It has taken many years to come to fruition, but we have always kept the SCW project in our restoration plans. Finally, in winter 2016–17, we were able to begin, and the land care crew cleared buckthorn and honeysuckle along the creek (see map, phase 1). And now, for the last few months, the crew has been clearing along the road and down the slope to connect with what they cleared last winter (see map, phase 2).

It has been hard work. The crew has cut hundreds of large honeysuckles and multi-stemmed, 25-foot-tall “old growth” buckthorns, some of which had more than 30 years’ of annual rings. The hard work has been worth it, however, dramatically revealing many beautiful oak trees and the meandering Woodland Creek, as well as establishing the connection to the open oak woodland to the west. We’re excited for spring so we can introduce prescribed fire to part of the clearing and also see how the wetland plants and spring ephemerals respond to the increased light.

As of this writing we are about 75 percent finished with phase 2 in the 4-acre area adjacent to SCW and will finish it either this winter or next.

After phase 2, we will continue clearing along Arboretum Drive further north and east (see map, phase 3), to open the area for the old oak savanna and spring ephemerals that grow along the road all the way past Balden Street. And soon we hope to explore options for extending the clearing work from the oaks even further north into the wetlands along the south shore of Lake Wingra (see map, phase 4).

Stay tuned, and if you haven’t driven the eastern part of Arboretum Drive in a while, I encourage you to check out the recent work.

Finally, we’d like to acknowledge the generosity of donors who help make land care possible by giving to the Land Stewardship Fund, which supports all of the Arboretum’s restoration work.