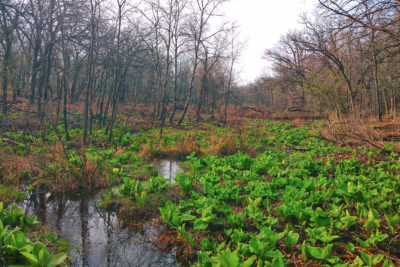 After a wet but productive burn season, spring turned to summer and black burn units turned green. Early prairie species such as hoary puccoon and bird’s-foot violet were quick to bloom. Bloodroot, Virginia bluebells, and trout-lily blossomed in the woodland understories. Unfortunately, just like every year, invasive species also began to grow. Using a variety of methods, we have been working hard to control the spread of invasive species this summer.

The late arrival of spring caused a short but vigorous growing season for early invasive species such as garlic mustard and dame’s rocket. We employ a few different methods to manage the unwanted species. Selective spot spraying early in the season helps avoid more time-intensive work later in the year and also minimizes damage to native species that have yet to emerge. Once garlic mustard and dame’s rocket are in bloom, we mow large patches to keep it from seeding. Once seeds are present we hand-pull individual plants. This part of our work is on-going all summer, and we have help from student workers from May through August.

One problem facing our wetlands is an explosion of invasive cattails. Increased stormwater flow from the surrounding urban environment has expanded the population in Teal Pond Wetlands and Curtis Prairie. To combat cattails, we cut them down with brush saws and stump-treat to stop them from resprouting. (We only cut and treat cattails in drier upland areas with no standing water, and we use the sprayer nozzle close to the stump to prevent runoff.) Many areas have been cut and treated more than once, as cattails spread through their roots and it takes several herbicide applications to kill the root system. We have focused on upland areas as they have more potential to establish native habitat. 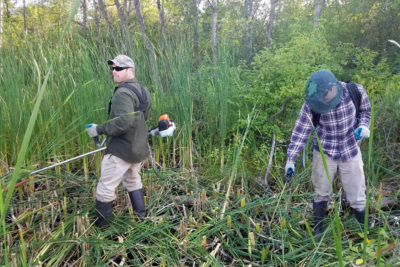 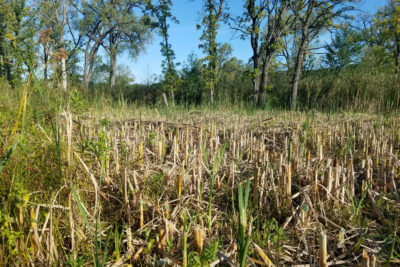 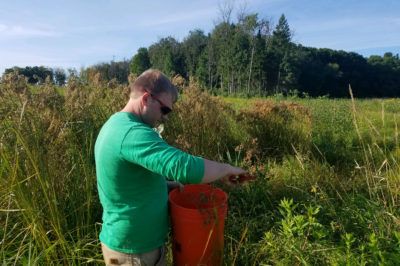 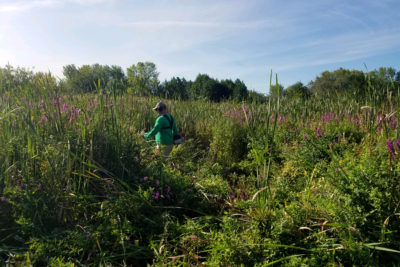 Not only are we surveying areas with high cattail populations but other wetlands as well. In Skunk Cabbage Wetlands, we have been monitoring units that were recently brush-cleared and have seen the expansion of many important species such as cardinal-flower, various sedges, spotted Joe-Pye-weed, sweet Indian-plantain, and swamp milkweed. We remove the few cattails we see to prevent the establishment of a large population and create space for more native species to flourish.

As we remove invasive species, it is important to fill the gaps they left with native species. To do this, we collect seed from our more diverse units, clean it in the fall, and spread it before there is snow on the ground. By adding native seed over the past several years, we have seen the biodiversity of prairies, savannas, and woodlands grow. We collect native seed throughout the summer and early fall in order to put the seed down later in the year. Fall burn season, reed canary grass treatment, garlic mustard and brush/tree removal will all be part of our work as we wrap up the growing season.