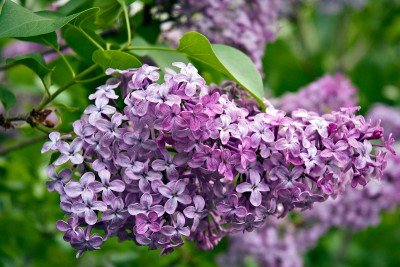 On April 19, 1935, the first lilacs were planted in Longenecker Horticultural Gardens—known at the time simply as the Arboretum’s horticultural area. It was named in 1967 in honor of G. William Longenecker, a professor of horticulture and landscape architecture at UW–Madison and the Gardens’ first curator. Longenecker developed the blueprint for the entire horticultural area—and the lilac collection was his masterpiece.

In the early 1930s, the Gardens and the area around them was mostly open farmland. To design an inviting area for future visitors, Longenecker laid out the lilac beds to create intimate “rooms” within the landscape, surrounding the visitor with “walls” of plants and “windows” into other rooms, enticing the visitor to explore them all.

Longenecker’s design was carried out by a crew of 200 Civilian Conservation Corps (CCC) members stationed at the Arboretum. Using his drawings, they meticulously removed sod in the shapes he had devised and hand-dug each bed. On Good Friday, April 19, 1935, the CCC began to plant them with more than 100 lilac plants representing 54 different taxa.

The very first planting was the Japanese tree lilac that still stands just west of the Gardens’ arched main entrance. Other specimens planted that day can also be found in the collection today. To identify these lilacs, look at the copper accession tags. Every plant in the Gardens is assigned an accession number—the first two digits designate the year they were acquired. Hundreds of additional lilacs have been added through the years. The collection is one of the largest in North America, fulfilling the proclamation made in the May 16, 1941, CCC Arboretum newsletter that “in time it will undoubtedly be one of the greatest collections in the country.”

Native to Europe and Asia, lilacs arrived in America during colonial times, brought by French, Dutch, and English immigrants. By the mid-1600s, there are accounts of lilacs being grown throughout the colonies. All of the early imports were common lilac (Syringa vulgaris), native to the Balkan region of eastern Europe. Beginning in the mid-1800s and continuing through the early 1900s, European explorers brought more than a dozen new lilac species and subspecies back from Asia, primarily China. A plethora of hybrids were created from these new imports, adding additional shapes, sizes, and scents to the lilac array.

In 1935, lilacs were in vogue partly due to the availability of the new species and hybrids. A grand example were French hybrids, created in Nancy, France, by three generations of the Lemoine family. Starting in 1870, Victor Lemoine and his wife, Marie Louise, crossed a small double-flower common lilac with some of the best single-flower common lilacs available, as well as a recently imported species of early flowering Asian lilac (Syringa oblata). They, followed by their son Emile and eventually his son Henri, would use offspring of these and subsequent crosses to introduce 241 lilac cultivars between 1876 and 1955. Of the 54 lilac taxa originally planted in the Longenecker Horticultural Gardens collection, 35 were Lemoine hybrids.

Though there are now species and hybrids that flower well into summer, lilacs are still known throughout Wisconsin as harbingers of spring. Like the return of the robin, lilacs in bloom let us know that winter is over and spring is truly here.