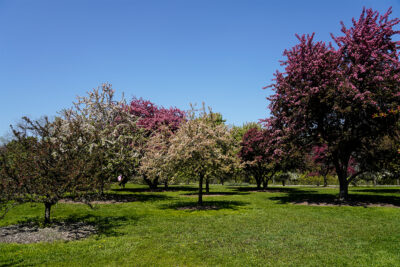 While the trees and shrubs draw people’s attention in the Longenecker Horticultural Gardens living collections, the green expanse of lawn sets them off. These lawns also provide easy access through the Gardens and help keep insects such as ticks at bay. The lawn is also a polyculture of species that supports insect and animal diversity.

Red fescue is also noted for its drought tolerance and low water, mowing, and fertilizer requirements. And while it does well in sunny areas, it is also the most shade tolerant of any cool-season turf species – an important attribute when growing in a tree collection.

The lawn areas are mowed regularly during the growing season at three-and-a-half-inches (taller than conventional lawn mowing), which helps them better tolerate stress by encouraging more root growth and reducing water evaporation from the soil by providing insulation from summer heat.

No fertilizer or herbicide is used to maintain lawn areas, and grass clippings and fallen leaves are mulched in place. This management strategy allows other low-growing broadleaf plants such as clovers, plantains, violets, and Prunella to thrive, making the lawn more diverse and resilient. These species also flower at low height and over long periods, tolerate foot traffic, and are moderately competitive, allowing them to establish in turf without taking it over and offering nectar and pollen to a wide array of pollinators. Pollinators documented using the Longenecker lawn range from ubiquitous honeybees (Apis spp.) to the federally endangered rusty-patched bumble bee (Bombus affinis).

Two broadleaf species that draw most people’s eye (and ire) in lawns –  dandelions and creeping Charlie – actually play a positive role in a lawn’s ecology. Dandelion (Taxaracum officinale) is native to Eurasia and naturalized throughout most of North America. The flowers are visited by many pollinators and are an important nectar source early in the season when few other flowers are blooming. Their deep taproots help to loosen and aerate soil as well as pull nutrients like calcium from deep in the soil, which makes the nutrients available to other plants once dandelion leaves decompose. Several bird species also eat dandelion flowers, buds, and seeds.

Creeping Charlie (Glechoma hederacea), a British Isles native, has also become naturalized throughout North America and is visited by pollinators looking for food early in the season. Not all the flowers equally reward pollinators, however. Creeping Charlie employs what is known as a “lucky hit” strategy. The term was coined by biologist Edward Southwick, who discovered that the flowers produce an average nectar content of 0.3 milliliters per flower but range from 0.06 to 2.4 milliliters. Of the 805 flowers he measured, he found that 8 percent had a large volume of nectar and the rest had almost none. Despite this, Southwick found that foraging on creeping Charlie was still worthwhile for pollinators and kept them coming back.

Many animals also thrive on the lawn, eating seeds, leaves, and insects. The most conspicuous are wild turkeys and deer, but thirteen-lined ground squirrels, eastern moles, sandhill cranes, rabbits, dark-eyed juncos, and American robins are also common seasonal sights. Weasels, hawks, owls, raccoons, coyotes, and skunks can also be found prowling through the lawn, often at night, in search of prey.

Next time you visit the gardens, see how many different plant, insect, and animal species you can spot, the number may surprise you.