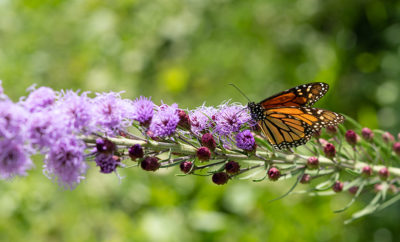 On August 26, 2014, the Center for Biological Diversity, Center for Food Safety, Xerces Society for Invertebrate Conservation, and the late monarch expert Dr. Lincoln Brower petitioned the Secretary of the Interior, through the United States Fish and Wildlife Service (USFWS), to protect the monarch butterfly (Danaus plexippus plexippus) as a threatened species under the Endangered Species Act (ESA). On December 15, 2020, after careful deliberation and the input of hundreds of individuals and organizations, the USFWS reached the decision that adding the monarch butterfly to the list of threatened and endangered species is warranted but precluded by work on higher priority listing actions for other species.

Here are my thoughts about this decision.

Protecting species and their habitats is important. Humans depend on the ecosystem services provided by intact habitats: pollination, clean air, water filtration, extreme weather mitigation, and even our own mental and physical well-being. The loss of species indicates that the intact ecosystems providing these services are out-of-whack. Additionally, I would argue that because our actions destroy ecosystems and drive species to extinction, we have a moral and ethical responsibility to protect natural systems as best we can.

Monarchs matter. The monarch is a flagship species that builds connections between people and the natural world. Monarchs are beautiful, interesting, familiar, culturally significant, and well-loved by people in diverse communities throughout North America. People care a great deal about them, and I would argue that anything that strengthens connections to nature is important. We have very little hope of saving natural systems – for the benefit of all living things, including ourselves – unless people care.

In addition to their value as a flagship species, monarchs are like the proverbial canary in the coalmine. A decline in their numbers is a signal that the natural systems that support them aren’t working.

Monarchs are not doing well. The year-to-year fluctuations in monarch numbers, typical of most insects, makes it difficult to be precise about how much monarch populations have declined since we started measuring them. Anyone who has observed monarchs, even casually, over the past 20 or so years in the Upper Midwestern U.S. has noticed that their numbers are lower than they used to be. We generally measure the size of the Eastern Migratory Monarch Population (the population that migrates to Mexico) by the numbers of hectares of land with trees covered by monarchs in their Mexico wintering sites. Since we’ve been measuring, this number has fluctuated from a high of 18.2 hectares in the winter of 1996–97 (coincidentally, when I first visited them) to 0.67 in the winter 2013–14. A population viability analysis conducted by a monarch conservation working group (of which I’m a part) indicated that a population that fluctuates around 6 hectares is likely to survive. Since 2007, we have only achieved 6 hectares once, in the winter of 2018–19.

A similar population viability analysis was done for the Western Migratory Population that winters in sites along the coast of California. That analysis predicted that the population was unlikely to recover if it declined to 30,000 monarchs at these sites. It reached that number in the winter of 2018–19, was approximately the same in 2019–20. Early numbers this year suggest that it might be as low at 2,000. The western population may have entered what is known as an “extinction vortex” from which it won’t recover. This incredibly sad development is a depressing indication that the models work.

The Endangered Species Act matters. In my opinion, the ESA is one of the most important pieces of environmental legislation in the United States. The Act, signed into law by President Richard Nixon on December 28, 1972, recognized that the species with which we coexist are of “esthetic, ecological, educational, recreational, and scientific value to our Nation and its people,” and that many native plants and animals were in danger of becoming extinct. The ESA is designed to protect both species at risk of extinction and the ecosystems upon which they depend. Because no other U.S. law provides such sweeping protection of habitats, the work done to protect individual species has ramifications for other species. Millions of acres of critical habitat have been designated and protected.

The ultimate goal of listing a species is that it recovers to the point that it no longer needs ESA protection. Most listed species have a recovery plan with objective, measurable criteria that, when met, would result in a determination that the species can be delisted. Since the inception of the ESA, 2,360 species have been listed (1,414 animals and 946 plants), and 93 have been delisted. One might interpret this as a sign that the Act doesn’t really work, because so few have been delisted—but it is important to note that only 11 listed species have gone extinct.* Twenty were delisted because there was an error in their listing (in some cases additional populations may have been found, or it was later determined that they weren’t a listable entity), and 62 have recovered, including, most recently, the gray wolf. While we don’t know for sure what would have happened to these species without the protection of the ESA, scientists estimate that hundreds of them would have gone extinct.

In summary: We need to do more to protect monarchs. Thousands of people are working to preserve monarch habitat, and I firmly believe that without these efforts monarchs would be much worse off. We can learn from the Red Queen in Lewis Carroll’s Through the Looking Glass, who said to Alice, “Now, here, you see, it takes all the running you can do, to keep in the same place. If you want to get somewhere else, you must run at least twice as fast as that!” Our population viability analysis told us that current monarch numbers are not sustainable. If we agree that preserving this amazing species for our children and grandchildren is a worthwhile goal, we’ll need to “get somewhere else,” i.e., we must run faster. The protection of the Endangered Species Act would have helped us do that. However, while the USFWS has determined that listing monarchs is warranted by documented declines in their numbers, other species are more at risk. Now, it is up to us to speed up our efforts.