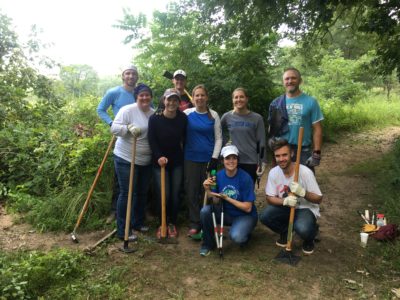 Water can cause major trail damage, and we had a lot of rain this summer, with more than 25 inches of total rainfall. Flooding inundated a number of prairie trails—and most of them are still closed. In addition, heavy rains caused four major washouts of trails that are located on the fall line of a slope. This means that instead of water flowing across a portion of the trail, it courses down the trail’s path, often carrying away surface layers. The severity of washouts varied, from a few inches of erosion on an already rutted section near Skunk Cabbage Bridge, to knee-deep holes in the B4–B6 trail segment in Curtis Prairie.

Trail flooding and washouts have become more frequent as heavy rain events and annual rainfall increase. The ranger unit, with help from land care staff and volunteer groups, have worked diligently to maintain and repair trails. However, after the same trails have repeatedly flooded and washed out, we decided to make some improvements that we hope will help the trails better withstand heavy rainfall. These projects required a lot more people power.

The Arboretum is truly sustained by volunteers who give their time and efforts in all areas of operations—and the trails are no exception. From June to October, the ranger unit was bolstered by 36 volunteers from 6 organizations, who donated 103 hours to complete 4 trail projects. Trail work is not always easy, but the volunteers embraced the challenges head on and had fun doing it.

The Bluetree Network has previously volunteered at the Arboretum, and they are always fun to work with. They joked and played trail games—and also accomplished a lot. In three hours, we installed two water bars near Z5 in the Grady Tract to direct water off the trail, restored 50 feet of washed-out trail, and evened out another 50 feet of trail.

Every year, the United Way Seasons of Caring event mobilizes people from local companies to get out and volunteer, and they regularly come to the Arboretum. In August, 15 volunteers from 3 organizations came out on 2 mornings to tackle a particularly gnarly area. The project goal was to reroute almost 200 feet of trail in Wingra Woods between K4 and K5. The old trail at K5 sloped down from Arboretum Drive along the fall line, and after many years of use it had become a rut of rocks and roots. The geography made it a prime site for a reroute. The trail was rebuilt to follow the slope’s contour, and we added a switchback to minimize disturbance in the area.

The first day’s group was a team of 6 from JP Cullen plus 1 from Exact Sciences, and they accomplished far more than what we expected. They installed 150 feet of new trail surface (also called “tread”) in 3 hours, leaving only 25 feet to be completed on either end of the new section.

On the second day a group of 7 people from Hausmann-Johnson Insurance and 1 from Exact Sciences were tasked with doing a lot of the work that goes unnoticed. Three volunteers installed drains to direct water off the trail, while the rest of the group used tampers to compact and even out the tread. After the finishing touches were made to the new section, it was time to join it to the existing trail system. Half of the group worked on finishing the tread while making the joins look natural and even. The other half rehabilitated the old trail section to blend it back into the surrounding natural area. They dug up the old tread, planted saplings where the trail had been, and littered it with logs and other debris. This step often gets overlooked but it is essential to preventing further use and damage.

As a part of the UW–Madison, we always appreciate the opportunity to engage volunteers from the campus community, especially from student organizations. This field season the ranger unit worked with two separate UW clubs to improve the trails. The Badger Volunteers worked on leveling out the Curtis Prairie trail section A6–B5, which had eroded so much that visitors could barely fit both feet on the trail. The volunteers endured a plague of mosquitoes to repair approximately 200 feet of trail during six hours of service.

The Finance & Investment Society club arrived on a crisp October morning ready to tackle a washout in Noe woods. This project involved moving washed-out gravel from the woods and laying it back on the trail, using only shovels, buckets, and a wheelbarrow. They came in good spirits and by the end of the morning had restored 75 feet of trail.

When out hiking, it is easy to notice problem areas. I encourage visitors to also recognize the good trail areas—and to think of the hard work and community spirit that has to come together to mend trails, worn by use and mother nature, so they may continue to benefit the Arboretum’s many visitors.