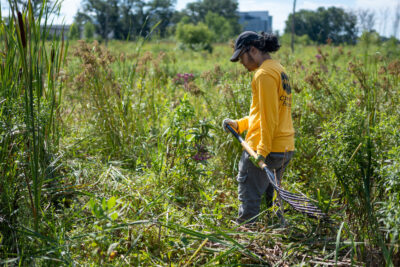 While on site, the OFS crew, under the attentive eye of their crew leader, completed work on two main projects. The first was managing invasive cattails in Teal Pond Wetlands through cutting and targeted herbicide treatments of the cut stems. Although the cattails are dense in some areas, there are areas of high-quality sedge meadow and wet prairie hanging on, including native plants such as cardinal flower, swamp saxifrage, and swamp thistle.

A pair of red-headed woodpeckers were attempting to nest there this summer, though we aren’t sure if they were successful or not. Juveniles have been seen in the area so that gives us hope, but European starlings were also seen using their nesting cavity. Either way, they are a species of high conservation priority for us and the fact they were trying to nest there was exciting and hopefully something that continues in the future. We’ve invested a lot of resources in restoring Teal Pond Wetlands over more than 10 years, so having the extra help from OFS in maintaining the restoration has been greatly appreciated.

The second project involved removing shrubs and small trees at the Pond 2 research swales just southeast of Curtis Prairie near the Beltline. Work was done along a concrete ditch that is part of our stormwater management infrastructure and also within the research swales themselves.

Tree and shrub growth in these areas is undesirable for two reasons. First, if shrubs and trees grow too big the roots can undermine the concrete and cause it to heave, which makes it more susceptible to erosion and potential failure. And if trees growing along the berms of the swales get too big, they can tip over and the uprooted soil can damage the berms. So the crew’s work is helping to preserve the long-term integrity of our infrastructure. Prairie is also planted alongside the ditch and swales, so removing shrubs and trees gives the prairie plants more light for growth and helps our restoration efforts.

There was a Conservation Academy crew on site last November as well. They helped with invasive tree and brush removal at Bolz Prairie, an Arboretum outlying property north of Middleton, and in an overgrown oak woodland near Skunk Cabbage Wetlands on the south shore of Lake Wingra. This helped us expand ongoing invasive tree and brush removal at those sites where we have remnant prairie (Bolz) and nesting sandhill cranes (Skunk Cabbage Wetlands).

The two crews endured some cold days last November and some hot ones this August, but in spite of the tough conditions they helped us move numerous projects forward and we are grateful for their assistance. We hope their time at the Arboretum has been beneficial for their overall experience, and we wish them the best in their future endeavors!