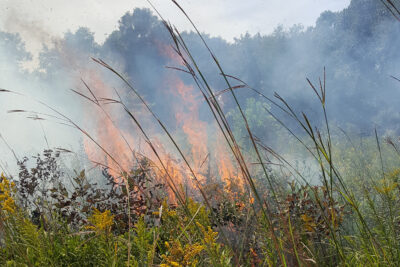 Prior to European settlement, fires were a natural part of the North American landscape. Some habitat types, such as prairies, evolved to depend on fire to maintain ecosystem health and vigor. Prairies likely burned every one to five years.

Following European settlement, habitat fragmentation and fire suppression reduced the number of naturally occurring fires and there was a decline in the number of fires set by Native Americans. Without fire, woody vegetation such as trees and shrubs begin to encroach on prairies. If allowed to establish and grow, these woody plants will begin to shade native prairie plants. This can lead to an increase in soil moisture and decrease available light, making it harder for prairie plants to establish and easier for woody species to thrive and spread.

To maintain fire-dependent ecosystems, land managers now use prescribed fire as a tool to mimic the fires that historically occurred on the landscape. At the Arboretum, prairies account for approximately 140 acres (57 hectares) of the total 1,200 acres (487 hectares) in Madison, and prairie units are burned every two to four years.

While prescribed fires are often conducted in the spring or fall when desirable vegetation is not actively growing (dormant season), most naturally occurring historical fires occurred in the summer (growing season) when lightning strikes are more common. In recent years, land managers and researchers in the Midwest have introduced prescribed fires in the summer. This expands the available time each year to conduct prescribed fires (burn window) and may have positive effects for setting back undesirable vegetation, such as woody species in prairies, while benefitting additional desirable species.

In 2018, Arboretum research and land care staff started a project in Wingra Overlook Prairie with the goal of assessing the efficacy of dormant season versus growing season prescribed fires for controlling woody stem encroachment in the prairie.

Wingra Overlook Prairie is a 5.14-acre (2.08-hectare) prairie located northwest of Arboretum Drive across from Longenecker Horticultural Gardens. In 2018, 30 one-square-meter plots were established in the western half of the prairie. In each plot, all woody stems were marked with a numbered metal tag and identified to species.

For each burn unit, photo monitoring was conducted following the burn. Monitoring points were visited weekly during the growing season and periodically throughout the dormant season. The photos were compiled into videos to follow regrowth in Wingra Overlook Prairie after a dormant season (spring) burn and growing season (summer) burn.

In 2020, these plots will be remeasured to assess mortality of woody stems following the 2019 prescribed fires. Comparisons will be made by species and size class to determine if differences exist between dormant season and growing season prescribed fires for controlling woody stem encroachment. This will help inform prescribed fire management at the Arboretum.