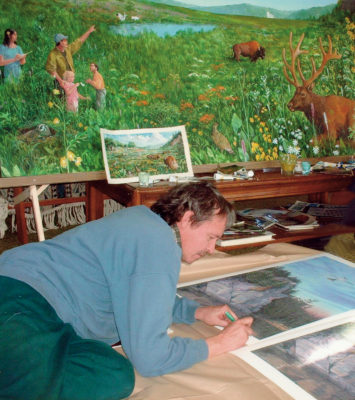 Victor Bakhtin working in studio on the Arboretum mural project.

Greg Armstrong was the Arboretum’s director from 1983 to 2004. Armstrong met and became friends with artist Victor Bakhtin while planning the Visitor Center building addition in the 1990s, and invited him to create the murals that grace the orientation theater. Bakhtin’s seven beautiful murals illustrate the changing relationship of humans to the land over thousands of years, since the last glacier retreated from Wisconsin. The seventh mural depicts a hopeful vision that ecological restoration can lead to humans living sustainably and in harmony with others.

Armstrong shared this remembrance of the great artist, who passed away in November.

With an appreciative and saddened heart, I wish to honor Victor Bakhtin and share the invaluable contribution he made to the Arboretum. Victor, who was an artist friend and fellow dreamer of an ethical relationship with the land, passed from this life in November 2016. I knew Victor when I was the director of the Arboretum. Our relationship began when we were planning for a new addition to the Arboretum visitor center in the late 1990s. We wanted to include in this new building an orientation theater with a film explaining what the Arboretum was about. In addition, we wanted to tell a visual story with a set of murals depicting ecological restoration and the human relationship to the land—the organizing principle of the Arboretum. Fortuitously, I saw an absolutely fabulous painting by Victor portraying a new vision of the Badger Ordinance Work’s ravaged land as a thriving restored prairie. Inspired by his work, I asked Victor if he could come to the Arboretum and similarly capture the essence of this place. He agreed.

Victor grew up and lived in the Soviet Union most of his life. He became a well-known natural history artist, illustrating journals and technical papers among other things. George Archibald, co-founder of the International Crane Foundation, met Victor while he was working to protect cranes in the Soviet Union.  Its collapse left Victor without a source of income or artistic commissions, and George invited him to come to the United States. After arriving Victor painted wonderful murals at the International Crane Foundation’s headquarters and in other parts of the country, as well as the Arboretum.

The Arboretum murals are spectacular in part because of his meticulous research into the subject matter he depicted. Among the people he consulted was Harry Whitehorse, a Ho-Chunk Nation artist, whose ancient ancestors built the mounds located at the Arboretum. Victor portrayed the First Nation’s relationship to the land from the time the glaciers receded more than 12,000 years ago. The first several murals exemplify the Native American’s respectful and sustainable relationship with the land. Subsequent murals show a different landscape, where humans disregard and abuse the natural world. With insight from Arboretum staff, he learned about Aldo Leopold, the land ethic, the conservation movement, and the advent of ecological restoration in order to ultimately portray a hopeful vision for the human relationship with the land. Victor also studied plants and animals native to Wisconsin historically and currently. The images look almost real. The beautiful prairie including butterfly milkweed and pale purple coneflower give an immersive experience. The elk seems to look at you with it’s Mona Lisa eye. Fabulous!

As the mural’s story began to unfold, Victor painted small-scale studies to share with us. After these studies, he began painting the murals on large sheets of hard board. I have a fond memory of seeing Victor pull up in front of the new visitor’s center in his van. He would pull these large floppy sheets of hardboard out of his van. Irreverently, he would charge into the building with these extraordinary pieces of art. I felt as if he was casually handling a Chagall. I am pleased to report that no harm befell these murals as a result of his confident, no-nonsense handling. When I retired in 2004, the Arboretum Friends and staff gave me one of his studies, which I treasure.

I feel privileged to have worked with Victor Bakhtin on this artistic project. The engrossing portrayal of ecological restoration and the human relationship to the land is a testament to Victor Bakhtin’s artistic abilities and passion for honesty and accuracy. These murals join many other fine art works that the University of Wisconsin has commissioned over the years to artistically celebrate intellectual and scientific contributions. Victor’s paintings are an important statement about where we humans fit into our home, a legacy he left to inspire generations to come.