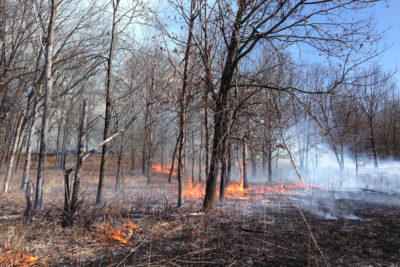 For several days in February 2017, temperatures in southern Wisconsin reached more than 60° F. Laura and her team investigated if this prolonged winter warming event would cause a response in plants. By sampling over 200 tree and shrub species from 55 genera in the Longenecker Horticultural Garden, they found that almost half of the genera exhibited a response, from bud swelling to full flower. This extreme climate event had the greatest effect on shade-intolerant plants, such as many shrubs, species native to cold climate areas, and species adapted to regions with constant spring temperatures.

Kim Thompson’s research focuses on how climate change may affect habitat below the snow pack, known as the subnivium. She and her team found that northern latitudes (Upper Peninsula of Michigan) have significant snowfalls earlier in the winter compared to lower latitude areas like Madison. Snow depth and subnivium quality also depend somewhat on the type of canopy cover: coniferous, deciduous, or open. This means that at northern latitudes, the thermally stable subnivium layer is created earlier. Although the formation of the subnivium layer depends on latitude and cover type, the subnivium disintegration (snow melt) is determined almost solely by latitude, with higher latitudes keeping the subnivium longer. Her research found that the UP is a good model for studying subnivium.

Marie Johnston investigates how temperature affects the viability of cocoons and how different species affect soil particle size and, in turn, hydrological and other ecosystem processes. Preliminary findings from one study suggest that temperatures of 40° C result in no live earthworm tissue in dissected cocoons. Another study shows that different species of earthworms do produce different size casts depending on their size. Kim O’Keefe investigates how the jumping worm impacts soil moisture and sugar maple physiology. After one field season, there is some indication that Amynthas reduces the ability of sugar maple to take up water, but further research is needed.

Andrea Weissgerber (MS student, Landscape Architecture) studies how the rare white lady’s-slipper orchid is faring in southern Wisconsin. In 2018 she will conduct extensive surveys to investigate which biotic and abiotic factors are important to determine the presence or absence of this rare plant.

Jordan Mandli (Public Health) and Scott Larson (Midwest Center of Excellence for Vector-borne Disease) study how invasive buckthorn affects the prevalence of ticks and how permethrin-soaked cotton deployed in forests might control ticks. After four years, there was no significant difference in tick prevalence between buckthorn and no-buckthorn plots. However, mice that used the treated cotton for nesting material had significantly fewer ticks. This control option is now being tested at residential properties.

Nicholas Bargren (undergraduate student Edgewood College) and Jed Meunier (research scientist, Wisconsin Dept. of Natural Resources) study fire as a management tool and as a natural process in the development of Wisconsin forests. Nicholas and his team are interested in the effect of fire intensity, duration, and seasonality on several different species of shrubs. Burn treatments started in 2017 and will continue through 2018. Jed was the keynote speaker and gave a very interesting presentation on using tree rings from decades-old stumps as a tool for learning about fire history in Wisconsin’s forest. He concluded that Wisconsin’s forests, especially pine forests, historically burned extensively and much more frequently than we originally thought.