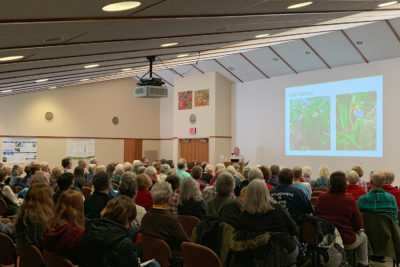 Students and researchers from UW–Madison departments and the Arboretum shared nine presentations and posters at the nineteenth-annual Research Symposium on February 14. The audience learned about recent research on tick control, rare plants, insects, wood fungi, the composition of southern Wisconsin deciduous forests, jumping worms, and how soil-plant fungi may interact in a changing climate.

The increase in tick abundance—and thus the prevalence of Lyme disease—is a growing concern in southern Wisconsin. Sydney Ring (undergraduate, Department of Entomology) shared results from her study (with Jordan Mandli, PhD student, Entomology) looking at how small mammals use two different types of cotton in cardboard “tick tubes.” Tick tubes are stuffed with permethrin-treated cotton and placed in outdoor locations where small mammals scavenge the cotton, providing them with nesting material that can control the ticks that feed on them. However, no study has investigated if small mammals prefer certain types of cotton. Sydney provided cotton balls and cotton batting to compare the rodents’ preference for nest building. Both cotton types were equally used by small mammals, suggesting that each might have specific benefits. More research is needed to learn exactly how the cotton is used in nests.

Andrea Weissgerber (MS student, Landscape Architecture) studies the now rare white lady’s-slipper orchid in southern Wisconsin. The last known comprehensive survey of the orchid was more than 30 years ago. To understand its current distribution and response to community and ecosystem changes, she surveyed thirty wetland sites in southern Wisconsin where the orchid was previously recorded, and she collected data on hydrology, water chemistry, light availability, herbivory, and associated species. Only half of the sites still had orchids, and these plants were often localized rather than widespread. Andrea found that orchid presence is highly correlated with groundwater levels and chemistry that have remained relatively undisturbed over time, and shrub encroachment is a major player in the decline of the species at these sites. Herbivory was not found to be a factor in the decline.

Vinicios (Vini) Ferreira-de-Freitas (PhD student, Entomology) Nicholas Thrun (research intern, Midwest Center of Excellence for Vector-Borne Disease), Skye Harnsberger (Entomology), and Jessica Ross (citizen science coordinator, Arboretum) reported on their respective insect-based research and monitoring projects. Vini and Nicholas discussed three years of mosquitos surveys done at open water bodies of the Arboretum. They found that the Arboretum is home to at least 21 species. Skye’s landscape scale research looks at habitat needs for the charismatic but imperiled monarch butterfly. In 2018, she surveyed 60 sites in Wisconsin, and preliminary results suggest that the sites with the largest isolated patches of milkweed (the monarch’s host plant) had the highest densities of butterflies. Finally, Jessica reported on the first year of an Arboretum citizen science dragonfly monitoring program. The goal of the program is to identify which dragonfly species are found at the Arboretum’s ponds and wetlands. In 2018, 9 volunteers visited 11 sites and recorded 13 unique species—a great first year effort.

Alden Dirks (MS student, Agronomy) shared his love and research of all things fungi. Alden is creating a list of the macroscopic wood-decaying fungi of the Arboretum. As a part of this monitoring, he is updating a list originally created by famed UW–Madison mycologist and botanist Henry Greene. To date, Alden has collected more than 100 specimens.

Brook Bowser (undergraduate student, Botany) shared a poster of her research (with Jared Beck, PhD student, Botany) investigating the ecological processes that shape the composition of Wisconsin deciduous forests. Specifically, she is looking at how the distribution of tree seedlings and saplings varied with light availability and proximity to adult trees. Preliminary findings suggest that both abiotic and biotic conditions affect distribution patterns, recruitment success, and tree community dynamics in temperate forests. Brook and Jared will continue their forests surveys in 2019.

Kevin Hobbins (undergraduate student, Botany) shared results of a project (with Kimberly O’Keefe, postdoc, and Kate McCulloh, assistant professor, Botany) looking at the effect of jumping worms and European earthworms on specific root length and arbuscular mycorrhizal fungi colonization of sugar maple roots. Preliminary results suggest that there are no differences in root length or arbuscular mycorrhizal structures between trees growing with and without jumping worms.

Finally, the keynote speaker, Dr. Richard Lankau (assistant professor, Plant Pathology) spoke about his research investigating whether trees can adapt their ability to tolerate climate change by altering their associations with soil microbes. Dr. Lankau and his team found through a series of laboratory and field studies that tree seedlings inoculated with microbial communities from drier environments could better tolerate drought conditions.