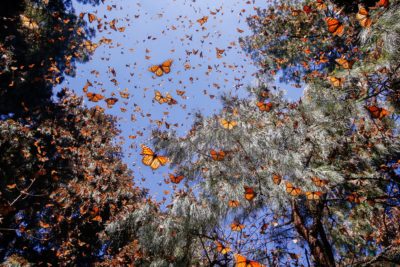 Monarch butterflies east of the Rockies typically start the journey in Canada and the upper Midwest, aiming for the Oyamel-fir forests in Mexico’s Transverse Neovolcanic Mountains. Photo by Sylvain Cordier (Getty)

“Walking around my family’s property in upstate New York last summer, I noticed something I hadn’t seen in years: scores of monarch butterflies flying around the milkweed that rings the perimeter of the yard. Six months later, at the end of January, biologists attending the Trinational Monarch Science Meeting, in Mexico City, confirmed what I and many others had been seeing throughout the summer and fall: the eastern monarch population was a hundred and forty-four per cent larger than it had been a year earlier. The announcement offered a modicum of hope amid dire warnings of mass extinctions and ecological catastrophe. Just two weeks earlier, the Xerces Society for Invertebrate Conservation had issued a finding that the monarch population west of the Rockies dropped by around ninety per cent in the past year and is on the verge of collapse.”