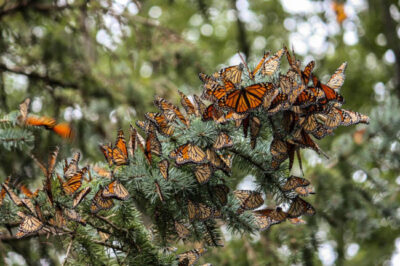 “Every fall, declining day length triggers one of the most incredible phenomena found in nature: the annual fall migration of monarch butterflies. Across North America, monarchs undertake an epic journey — up to 3,000 miles — to reach their overwintering grounds in Mexico and the California coast. For the eastern population of monarchs, the migratory generation are the great-great-grandchildren of the monarchs that left Mexico the prior spring.

“Their numbers peak during fall migration — at no other time of year is the population larger. Instinct pushes them on as they battle weather, hunger, fatigue and human-made obstacles to reach destinations they’ve never been to before. Yet somehow, they know the way.

“As perilous as migration is, monarchs already face an uncertain future. Over the past few decades, their numbers have plummeted. Since the 1990s, the eastern monarch population has declined by 80 percent and the western population by a staggering 99 percent. Habitat loss is the driving factor.”