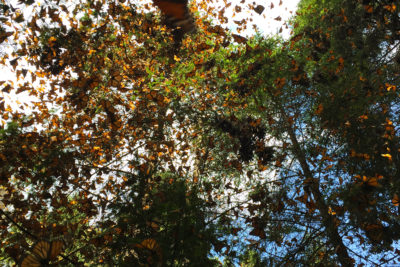 The forest area occupied by monarch butterflies in Mexico during the winter of 2019–20 was 2.83 hectares (a hectare is 2.47 acres, almost the size of two football fields), down from 6.05 hectares during the winter of 2018–19. This represents a 53 percent decrease from last year. The 2.83 hectares include 11 monarch butterfly colonies measured in late December 2019—three in the state of Michoacan and eight in the state of Mexico. Most of the occupied area (2.46 hectares) was located within the Monarch Butterfly Biosphere Reserve, which is protected by Presidential Decree.

To put this in historical perspective, the figure illustrates decade means of the area monarchs occupy in the winter (with only 7 years included in the first “decade” due to a lack of earlier data). There are big year-to-year fluctuations that probably result from year-to-year weather fluctuations during the breeding, migratory, and wintering phases of the annual cycle. Thus, saying that the population decreased 53 percent from last year is not very informative. The long-term average since the colonies were first measured is 5.62 hectares. The mean for the past decade is 2.82 hectares, almost exactly what was measured this year. Thus, 2019 was an average year for monarchs over the past decade. But this decade represents a big drop from previous decades—with means of 5.84 hectares from 2000–2009, and 9.31 hectares for the first 7 years that the colonies were measured.

Data from this year are a stark reminder that a single high year does not mean that the population has recovered. They are also a reminder that monarch numbers reflect habitat availability and weather conditions throughout the annual cycle. 2019 data from the Monarch Larva Monitoring Project, a North American citizen science project run jointly by the UW–Madison Arboretum and the Monarch Joint Venture, suggested that the population would be higher than it turned out to be, although not quite as high as in 2018. Additionally, reports from Journey North, another Arboretum citizen science project, suggested that high numbers of monarchs were migrating out of the Upper Midwest. Over the long term, there is a strong correlation between numbers in breeding grounds and winter numbers, but the tightness of the relationship varies from year to year. Available data and threats analyses suggest that weather conditions, habitat availability, and monarch numbers in the summer are important drivers, but we know that monarchs produced in the summer need to migrate successfully and survive the winter as well. Data from this year, combined with those from past years, may help us understand migratory and winter drivers better.

These numbers, and the need to understand their drivers, mean that our work isn’t done. We need to keep collecting data so that our understanding of monarch numbers and ways to build the population is based on accurate and up-to-date information. Current modeling suggests that habitat availability is a limiting factor for monarchs, so our efforts to increase breeding and migratory habitat are critical. Creating habitat wherever we can, educating others about what they can do, contributing data to citizen science programs (like the Monarch Larva Monitoring Project, Journey North, Project Monarch Health, Monarch Watch, and butterfly monitoring groups), advocating for the restoration and protection of wild spaces, and supporting organizations that are doing all of this work will help sustain monarchs. For more information about monarch conservation efforts in the US, please see the Monarch Joint Venture website.

I hope that you are doing well during the recent and rapidly changing complex world situation. It is a reminder of how connected we all are to the natural world, and how much we can learn from studying the organisms with which we share it.

This article was originally posted at Journey North and has been slightly modified.