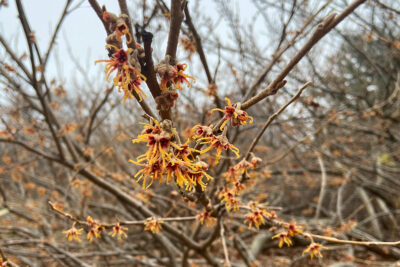 Some needle-bearing trees are deciduous – such as larch and bald cypress, which display impressive fall color – but most conifers retain needles year-round. However, they do lose some needles seasonally.

Depending on the species, latitude, and elevation, evergreen conifers such as pine, spruce, and fir generally retain needles from two to ten years. New needles are produced at branch tips yearly, while older needles closer to the trunk are shed. For most conifers, losing needles occurs in the fall, like deciduous trees dropping leaves. And before falling the needles change colors, including yellow, brown, and occasionally red.

The average life span of needles on common Wisconsin conifers is as short as two to three years for white pine, up to five years for white spruce, and up to thirteen years for balsam fir. The record-winner for needle retention belongs to the Great Basin bristlecone pine (Pinus longaeva), native to higher elevations of California, Nevada, and Utah, which can hold needles for up to forty-five years.

It has long been believed that fallen pine needles acidify (reduce the pH of) the soil. This isn’t the case, however. While the fresh needles are acidic, the pH is neutralized during decomposition and they have no real effect on soil acidity. A recent study from the University of Wisconsin–River Falls looked at soil pH under older deciduous and coniferous trees, including four pine species, and found no relevant effect on soil pH caused by needle or leaf litter decomposition over time.

While most woody plants went into winter dormancy months ago and ceased growing, some flowers can still be found in the Longenecker Horticultural Gardens’ collection. Sporting fragrant, perfect flowers with four unique sulfur-yellow, strap-like petals, common witch-hazel (Hamamelis virginiana), a Wisconsin native, still displayed a few flowers in December. The common name is thought to derive from the old English wych, meaning “to bend,” in reference to the plants flexible branches, and “hazel” comes from the resemblance of the leaves to those of hazels in the genus Corylus.

Another North American native species, Hamamelis vernalis, known as the vernal or Ozark witch-hazel, usually blooms from January into March. Though native to the Ozark Plateau, from southern Missouri through northwestern Arkansas to eastern Oklahoma, it is fully winter hardy in our area. The cultivar ‘Christmas Cheer,’ with showy yellow and red flowers, constantly sports blooms during the holiday season. In keeping with this year’s off-kilterness, the cultivar began blooming in mid- to late November this year.

Both species’ flowers are fragrant, bear nectar, and produce abundant sticky pollen. They are not able to self-pollinate however, which indicates that they are insect pollinated. Though witch-hazel reproduction is not fully understood, research indicates that flies and fungus gnats play a role in pollinating the flowers in the fall before freezing temperatures. For flowers present during winter, owlet moths in the family Noctuidae, referred to as shivering moths, appear to play a role. These moths overwinter as adults, living under leaf litter, and have the ability to raise the temperature around their flight muscles by as much as 50°F by shivering, so they can fly in search of food during winter months.

Once witch-hazel flowers are pollinated, actual fertilization does not occur until the following spring, around the time new leaves emerge. Fertilized flowers go on to produce a capsular fruit containing two seeds, which remains on the plant into the next season’s flowering cycle. These capsules eventually burst and forcefully eject the seeds, shooting them many feet away from the parent plant. The genus name comes from the Greek words hama, meaning “at the same time,” and melon, meaning “apple or fruit” in reference to the fruit and flowers being present at the same time.