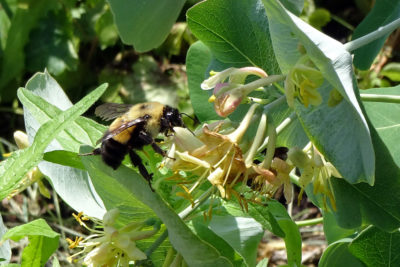 “The homeland of the federally endangered rusty patched bumble bee has shrunk by 90% in the past 20 years, yet the beneficial, fuzzy native bee can still be found in the backyards of Milwaukee.

Once found in 28 U.S. states and two Canadian provinces, the rusty patched survives in just a handful of states and one province. According to the current range map, Wisconsin is in the middle of the dominant contiguous chunk of what’s left in the U.S., an area that includes northeastern Iowa, northern Illinois and Minnesota, a state that’s made efforts in recent years to help the bee.

As recently as 2017, the rusty patched became the first bee species protected under the federal Endangered Species Act by the U.S. Fish & Wildlife Service due to its steep decline.

This helped sound the native bee alarm for professionals and backyard gardeners alike.

The good news is gardeners can help. Overseeing land ranging from modest urban lots to sprawling suburban yards, gardeners could even be considered crucial.”