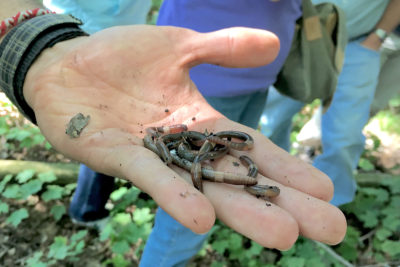 What could be more 2020 than an ongoing invasion of jumping worms?

These earthworms are wriggling their way across the United States, voraciously devouring protective forest leaf litter and leaving behind bare, denuded soil. They displace other earthworms, centipedes, salamanders and ground-nesting birds, and disrupt forest food chains. They can invade more than five hectares in a single year, changing soil chemistry and microbial communities as they go, new research shows. And they don’t even need mates to reproduce. . . .

To date, scientists have worried most about the worms’ effects on ground cover. Prior to a jumping worm invasion, the soft layer of decomposing leaves, bark and sticks covering the forest floor might be more than a dozen centimeters thick. What’s left afterward is bare soil with a different structure and mineral content, says Sam Chan, an invasive species specialist with Oregon Sea Grant at Oregon State University in Corvallis. Worms can reduce leaf litter by 95 percent in a single season, he says.

That in turn can reduce or remove the forest understory, providing less nutrients or protection for the creatures that live there or for seedlings to grow. Eventually, different plants come in, usually invasive, nonnative species, says Bradley Herrick, an ecologist and research program manager at the University of Wisconsin–Madison Arboretum. And now, new research shows the worms are also changing the soil chemistry and the fungi, bacteria and microbes that live in the soils.

In a study in the October Soil Biology and Biochemistry, Herrick, soil scientist Gabriel Price-Christenson and colleagues tested samples from soils impacted by jumping worms. They were looking for changes in carbon and nitrogen levels and in soils’ release of carbon dioxide, which is produced by the metabolism of microbes and animals living in the soil. Results showed that the longer the worms had lived in the soils, the more the soils’ basal metabolic rate increased — meaning soils invaded by jumping worms could release more carbon dioxide into the atmosphere, says Price-Christenson, who is at the University of Illinois at Urbana-Champaign.

Relative amounts of carbon and nitrogen in soils with jumping worms also shifted, the team found. That can affect plant communities, Herrick says. For example, although nitrogen is a necessary nutrient, if there’s too much, or it’s available at the wrong time of year, plants or other soil organisms won’t be able to use it.

The team also extracted DNA from worm poop and guts to examine differences in microbes among the jumping worm species, and tested the soils for bacterial and fungal changes. Each jumping worm species harbors a different collection of microbes in its gut, the results showed. That’s “a really important find,” Herrick says.