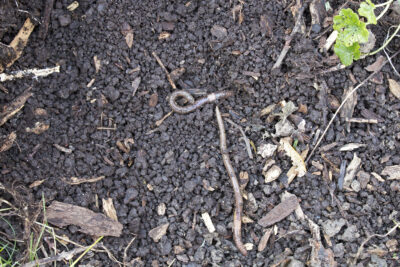 Jumping worms in granular soil that indicates their presence.

After months of cold and snow, the arrival of mild spring weather is beckoning gardeners around Wisconsin. Yet increasingly, green thumbs are being tested by invasive pests that can wreak havoc on the plants they prize.

Among the invasive species challenging ever more Wisconsin gardeners each year are a group of earthworms in the genus Amynthas, commonly known as jumping worms.

No earthworms are native to northern parts of North America, including Wisconsin, but some species were introduced from Europe centuries ago and have become commonplace. While those early invasive worms may not have been great for the native fungi and microorganisms that evolved within North America’s forest soils, whatever disruption they cause to native ecosystems and garden soils pales in comparison to jumping worms.