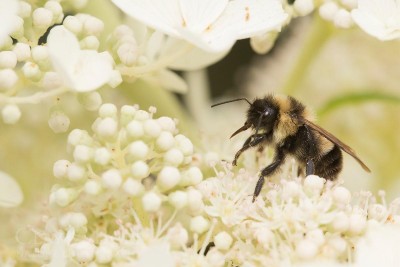 In 2011, we learned that a rare bumble bee species, Bombus affinis, or the rusty-patched bumble bee, was foraging at the Arboretum. Since that discovery, our native plant gardener, Susan Carpenter, has also become our resident bumble bee expert, and the Arboretum started a citizen science monitoring project affiliated with the Xerces Society’s Project Bumble Bee. Clay Bolt, a conservation photographer, learned about the imperiled bumble bee and began a quest to see and photograph it. His search brought him to the Arboretum. Listen to the story of when they met, hoping to see a bumble bee.

“The rusty-patched bumble bee used to be abundant, including in Wisconsin. A nature photographer became interested in the species’ dwindling numbers, and set out to create a documentary.

“This story starts at UW–Madison’s Arboretum.”